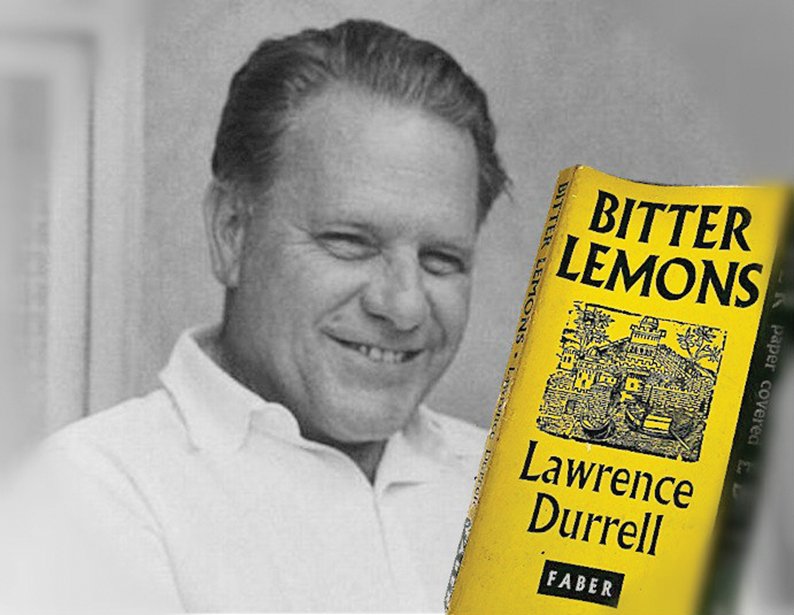 A British woman has made a surprising revelation about her own past whilst reading Lawrence Durrell’s Bitter Lemons of Cyprus and is now on a quest to find a young Cypriot featured in the book.

AFTER Sue King’s mother died in 2009, she inherited her old copy of Bitter Lemons of Cyprus, the iconic novel chronicling the island during the troubles of the 1950s.

It was a time she remembered well. Nowadays, Sue, a retired English teacher, lives in the north-east of England.  Back in the 50s, she was schoolgirl in Nicosia where her father, Donald Goldie, was the Anglican archdeacon at what is now St Paul’s Cathedral almost opposite the Ledra Palace Hotel.

Even now her vivid memories of an idyllic childhood, playing outside in the sunshine and in the summer moving to Troodos remain crystal clear. “Fruit and vegetables conveniently appeared at our house on the backs of donkeys,” she remembers. “The Cypriot people were friendly, particularly when my father took an interest in their beautiful churches and he was shown round with pride.”

As Sue played in the mountains, the young British writer Lawrence Durrell was settling down at his new house a mile from Kyrenia at Bellapais. To make ends meet, he took a job with the Colonial government, whilst also teaching English to Greek students at the Pancyprian Gymnasium. Despite his dreams of living a carefree existence, he soon found himself caught up in EOKAs struggle for independence.

Astonishingly, due to his day jobs, work on his book became a sideline. In the evenings, the clacking of his typewriter filled his cottage near the medieval abbey, as he described a turbulent island and its people with a true poet’s vision.

Sporadic acts of violence were intensifying by the spring of 1955. Sue remembers the first intimation of political disturbance came on the night of April 1 that year, when a bomb was detonated outside the Secretariat Building, causing minor damage. “It was not far from our house so we were wakened by the noise.” Other explosions followed, damaging an assortment of government buildings. “Our gardener, a retired policeman, reported to my father one day that he had found an improvised bomb under the culvert by the back gate. It appeared that it had been left there, perhaps for future use. Father was outraged.”

In fact, Donald Goldie was so angry he dashed to see Archbishop Makarios to demand an explanation.

Sue remembered: “Makarios responded by asking my father how often he slept away from home. Father admitted that this was a rare occurrence. Makarios explained that he never slept in the same bed twice. There were so many threats on his life that he had to take extreme security precautions all the time. One little bomb under a culvert was hardly worth a mention.”

When Bitter Lemons of Cyprus was published in 1957, Sue’s father bought the book. “Naturally, it was of interest to my parents but whenever friends asked their opinion of it, Father would opine that it had nothing much in it and dismiss it, although while saying this, I noticed that he would be looking at me as he spoke.”

And, that was that for the next 50-years. Curiously enough, however, it was only whilst reading her mother’s copy of Bitter Lemons on a recent holiday in Italy, that one incident in the book rang a bell. Durrell tells the tale of how Paul, one of his Greek students who had often spoke of his wish for a free Cyprus, was tasked with planting a bomb near the Anglican Church in Nicosia, but having spotted children playing nearby, he tossed the explosive in the churchyard.

Durrell portrayed Paul as a diligent hard-working student, with a great love of poetry and literature. So when, on a visit to a detention centre, he was startled to find his young pupil imprisoned for a terrorist offence. Paul was rather reluctant to admit that he failed to throw his bomb at the intended target, as other young activists had done. Near to tears, he said, “If (the jailer) wants to know why I threw it in the churchyard, tell him because I was a coward. I am unworthy. But the others are not like me. They are not afraid. I was supposed to throw it in a house but there were small children playing in the garden. I could not. I threw it in the churchyard.”

After reading this passage, Sue realised she was one of those children. “I have to be cautious about this one because my house may not have been the intended target of the bomb,” she tells the Sunday Mail. “However, what I remember of that afternoon is that I was playing with a friend on my swing, opposite the front door of the house which was accessed by the drive.”

Moreover, Sue explained how she heard a bang nearby and rushed into the house to find out what had happened. Her father was pacing up and down the hall, “ranting furiously about the irresponsibility and religious intolerance of those who would bomb a churchyard for political gain.” The explosion had left slight damage and no one was hurt, but her father was concerned that the religious groups should respect and support each other through difficult political times, and such acts would drive them apart.

Sue thinks her our house could have been the intended target of the bomb, as her father had worked hard to build trusting relationships with other religious groups, particularly the Greek Orthodox Church, and knew Archbishop Makarios well, “Perhaps he was viewed as a political nuisance,” she says.

Now, over half a century later, Sue wants to contact Paul to “thank him for his humanity.”

“The character of Paul is intriguing,” she says.  He is described as a solitary orphan, “burning with hunger for some advancement in life” but interested in poetry, borrowing most of Durrell’s books.  It is understandable that the Youth EOKA oath would have appealed to him but that the prospect of killing children did not fit with his poetic nature.”

Although she has hit a dead in her search so far, according to Durrell’s manuscript, Paul was a 17-year-old orphan living in the school lodging house; his father was killed serving with the British forces in Italy during the Second World War. Durrell noted:

He spent all of his spare time in the library studying the ancient Greek poets. He was a thin solitary boy, burning with hunger for some chance of advancement in life, in which he felt to be closing in upon him.

The story of Paul is a key part of the book, and highlights the fact that many pupils from the Pancyprian Gymnasium (and other schools) participated in the EOKA struggle; a number of them were killed in action. Durrell noted:

To the alarms of the night were added the daylight terrors of the open street, where small groups of students patrolled on bicycles, suddenly opening fire with pistols. And yet between these incidents the calm, the good nature, of everyday life was restored as if from some fathomless source of goodwill, banishing the fear these incidents had created. The sun still shone; and in perfect September sunshine the yachts fluttered across the harbour-bar at Kyrenia, the groups of drinkers sat around the cafes in idle conversation.

“I think the story of Paul illustrates how the call to violence clashes with humane instincts,” Sue adds. “Although he felt a “coward” for not planting the bomb, I would like to be able to tell him that he was a hero for putting the welfare of children above the political aims of the bomb. I would like to know how he fared after Cyprus became independent. I hope he was able to lead a full life.”

“We left Cyprus at the end of June, 1955. I did not meet Lawrence Durrell,” Sue recalled. “Lawrence Durrell writes well and evokes the Cyprus I remember, particularly with his vivid descriptions of the coast, flora and archaeological heritage… I have always thought it a mistake to revisit places where one has been happy but I think if there was a prospect of a meeting with Paul I would be pleased to make the journey.”

Durrell himself departed just a year later, with well-justified fears that his connection to the British administration had made him a prime target for assassination.

It is, of course, impossible to know for certain if “Paul” was the real name of the student in Durrell’s class, but there may be former school mates that remember him. Or maybe he is reading this article himself?