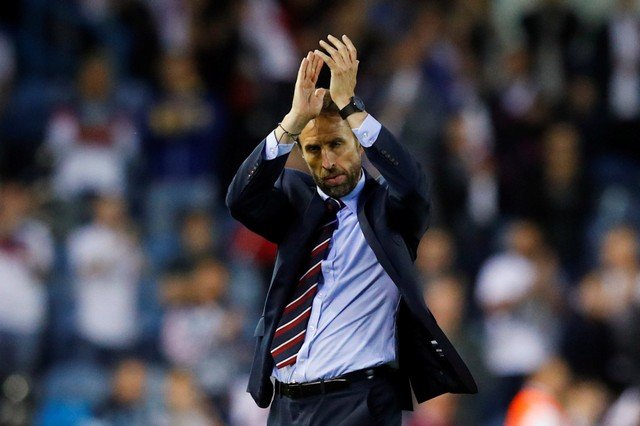 England fly to Russia on Tuesday unencumbered by the usual great expectations, with manager Gareth Southgate promising a complete break from previous tournaments when they seldom lived up to their billing.

“We are nothing to do with the past,” said Southgate in one of his final round of media interviews before they head to their camp in the village of Repino, which is approximately 30 miles from St. Petersburg.

“The past can inform us and help us but shouldn’t shape us. We have got to be our own team. This is a diverse team with different sets of skills. They have got a chance to make their own history.”

In plumping for an inexperienced squad whose average age is 26, Southgate has made a powerful statement of intent and observers have been impressed by the open approach he has encouraged the squad to what lies ahead.

Whereas two years ago former keeper Joe Hart memorably refused to reveal who won the team darts competition at Euro 2016, Fabian Delph has been happy to talk about the team-building exercises which Southgate has implemented, with Raheem Sterling apparently starring at table tennis and Delph himself prospering at pool.

Hart has not even made the squad this time, the experience of his 75 caps ditched in favour of likely No. 1, Everton’s Jordan Pickford, who has three, with Stoke’s Jack Butland (8) and Burnley’s Nick Pope (1) as back up. To put that into perspective, England’s three Group G opponents have nine keepers with 334 caps between them.

Of course, results, not experience, are what ultimately count and it is no surprise that England, who have not even made the quarter-finals for 12 years and flopped in their last tournament outing at Euro 2016, are trusting a different approach.

Southgate is encouraging his players to dream big.

“Why would I limit what they feel is possible?” the manager told the Sunday Telegraph.

“My job is to allow people to dream – what’s the saying? – ‘make the impossible seem possible’. They are at an age with hunger, enthusiasm…

“We have got to improve to reach the latter stages of a tournament and that is going to take a lot of hard work over the next few weeks and a huge commitment but I am seeing evidence that we are embracing that challenge.”

As a former England Under-21 manager, Southgate relies on many of the techniques which have brought success at youth levels.

England enjoyed another triumph on Saturday by winning their third successive Toulon Under 21 Tournament and the senior players have been asked to remember the enthusiasm they had as children for previous tournaments and share photos of their younger selves in an England kit. Even the 47-year-old manager has dug out one of his 12-year-old self from 1982.

“I think there’s been a disconnect from the fans with the players. We recognise that and part of it was maybe not knowing how much they care or their backgrounds. So we have tried to have an effect on that.” The relaxed approach has been extended to encouraging players to have a major input into tactics.

“They know they can have an input, they have a good opinion on things and they are able to suggest solutions that they may think are better than those we propose,” he said.

“They have a voice. We want them to have some ownership. When I decide, ‘Okay, we are not going with that one but we will have a think about this one,’ they really respect that.”

Taking to the runway for charity