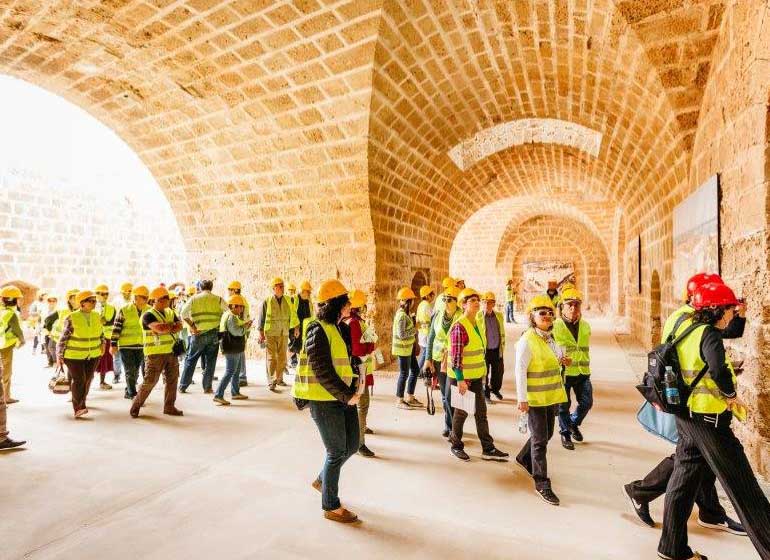 The work of the Bicommunal Technical Committee on Cultural Heritage, and the EU in Cyprus in restoring monuments on both sides will not be put off track by diplomatic protests emanating from the foreign ministry, representatives made clear on Monday.

“We have our programme and we are continuing, and we have the support of the two leaders,” the co-chairman of the committee Takis Hadjidemetriou told the Cyprus Mail.

Hadjidemetriou was responding to news at the weekend that the foreign ministry had sent a note verbale – an unsigned diplomatic rebuke – to the EU representation in Cyprus and to foreign embassies “reminding” them that only the antiquities department had the authority over monuments and sites in the north as the competent authority of the Republic of Cyprus.

The note had been sent by an official from the ministry with a letter attached from the antiquities department, leaving Foreign Minister Nicos Christodoulides, who reportedly had no knowledge of it, to put out the fire. He said on Saturday he would take the initiative to resolve the problem it had caused.

Hadjidemetriou said on Monday, it had been sorted out and as far as he was concerned, the committee was moving ahead with its plans.

A spokesman at EU House said the note verbale probably concerned a concert on June 5 at the revamped Othellos Tower in Famagusta in the north, which the head of the representation in Cyprus had attended. But it was more of a “catch all”, he said, and had originated with the antiquities department and it was not the first time one had been sent out. “Last year there was an event that triggered one.”

The EU representation will not be responding to the latest note verbale, the spokesman told the Cyprus Mail.

He also said the ministry was well aware that restorations in the north are part of the €30m a year in aid the Turkish Cypriots get from the EU “and will continue to receive”.

“This funding is approved by the RoC. Otherwise it would not have happened.”

The next event lined up for the committee will be a ceremony on June 19 to mark the completion of conservation works at the Ravelin Bastion in Famagusta in the north.

The monument was an essential part of the walls of Famagusta. Conservation on this part of Famagusta’s fortifications started in March 2017 under the technical committee and were implemented by the UNDP, with EU funding.

Talking about the importance of Ravelin and the Land Gate, Hadjidemetriou said they comprise “perhaps the most important part of Famagusta walls, after Martinengo Bastion” having always been a point of friction, both during the 1571 Ottoman siege of Famagusta, as well as more recently, in 1963-64 and later, during clashes between Greek Cypriots and Turkish Cypriots.

“In this place of conflict, we now open a gate for peace” and for our future prospects, Hadjidemetriou underlined.

England manager Southgate demands break with the past