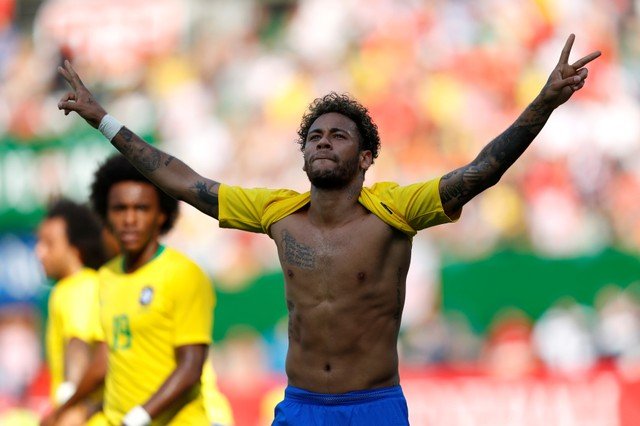 Brazil scored three superbly-taken goals, including a stunning Neymar effort, to beat feisty Austria 3-0 in sweltering conditions on Sunday and put the finishing touches to their impressive World Cup preparation.

Gabriel Jesus and Philippe Coutinho scored the other goals for the five-time champions who showed great patience in the first half as they worked to break Austria down before turning on the style after the interval.

Neymar started a game for the first time since injuring his metatarsal in February although he played in the second half of last week’s win 2-0 over Croatia when he celebrated his return with a goal.

His goal was sublime as he left one defender on the ground before scoring between goalkeeper Heinz Lindner’s legs.

It was also the first time the quartet of Neymar, Jesus, Coutinho and Willian had started a game together.

Austria, unbeaten in their last eight games and winners over Germany one week ago, proved uncomfortable opponents and had nothing to lose in front of a capacity 48,500 crowd, having failed to qualify for the World Cup.

Neymar, substituted in the 83rd minute, was on the receiving end of some rough challenges and needed treatment after a tackle from behind from Aleksandar Dragovic who was booked.

“The concentration and competitiveness of the team was laudable,” Brazil coach Tite told reporters. “Today was another example that, mentally, we are maturing. It was a difficult match, with heavy physical contact and we did really well.”

He would not confirm, however, that the same side would start Brazil’s opening World Cup game against Switzerland on June 17.

With the temperature hot enough for water breaks, tempers frayed as Casemiro replied with a rough tackle of his own.

Marko Arnautovic gave Brazil a couple of early frights before the South Americans went ahead in the 36th minute, Jesus scoring with a delightful dinked effort from a difficult angle for his 10th goal in 17 internationals.

Neymar’s goal in the 63rd minute was even better as he collected the ball on the left of the area, performed a drag-back which left Aleksandar Dragovic on the floor before sending his shot between Lindner’s legs.

That pulled him level with Romario’s total of 55 international goals, making him Brazil’s third joint top-scorer after Pele and Ronaldo.

Six minutes later, substitute Roberto Firmino set Coutinho clear down the left and he curled his shot wide of Lindner in for the third.

Brazil, who have won all four games this year without conceding a goal, also face Costa Rica and Serbia in Group E.

They will head to Russia in confident mood, having lost only one out of 21 games — a friendly against Argentina — in Tite’s two years in charge.

Around 2,000 students from both sides brought together over past school year