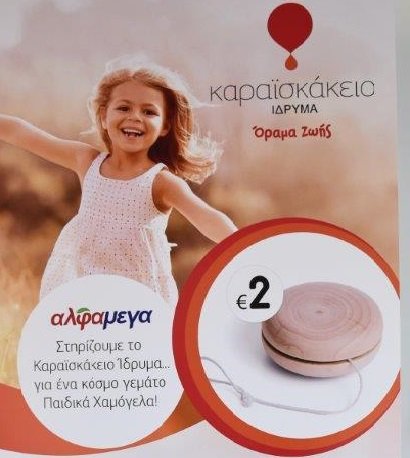 With the above message, which wishes to state the importance of happiness in children, Alphamega Hypermarkets and the Karaiskakio Foundation announced the beginning of their new campaign, which will see the former financially support the latter’s goal to create a diagnostic and research centre for childhood cancer. The two organisations invite the shopping public to add a spring in their step while playing with a yo-yo, a timeless classic toy symbolic of the innocence and carelessness of children.

The campaign, within the hypermarket’s Corporate Social Responsibility programme, encourages shoppers to purchase a yo-yo from Alphamega Hypermarkets for €2. The yo-yos will be available at the stores’ cash registers until June 30 or until stock runs out.

As highlighted at the event to introduce the campaign, life has its ups and downs for us all. Childhood happiness though should be a priority and everyone should help in anyway they can. Some children are little heroes and battle every day for a healthy life. They are entitled to hope and dream of a normal life, just like everyone else.

Alphamega Hypermarkets’ corporate social responsibility manager Elina Theodotou spoke about the daily struggle these children have to go through, saying “the struggles that children with cancer and their families face every day are very difficult and demanding. They deserve our admiration because rather than having a carefree childhood spent in school and parks, they spend endless hours in hospital. The least we can do is support them in their battle so they can have the best possible results… a world full of childhood smiles.”

Theodotou then urged the public to take part in the campaign. “Our children are the future of our society, the future of our country and, without exception, they all deserve a carefree life full of smiles. Let’s all become their playmates by buying the yo-yos and turning life the right way around.”

On behalf of the Karaiskakio Foundation, its president Dr Popi Nikolaidou Kanari talked about the foundation’s work, the important contribution that its staff and volunteers make to society, and its plans to create a diagnostic and research centre for childhood cancer. She also thanked Alphamega Hypermarkets, highlighting the importance of the organisation’s charitable character and its support in such matters.

Co-op robbery suspect to be tried in September