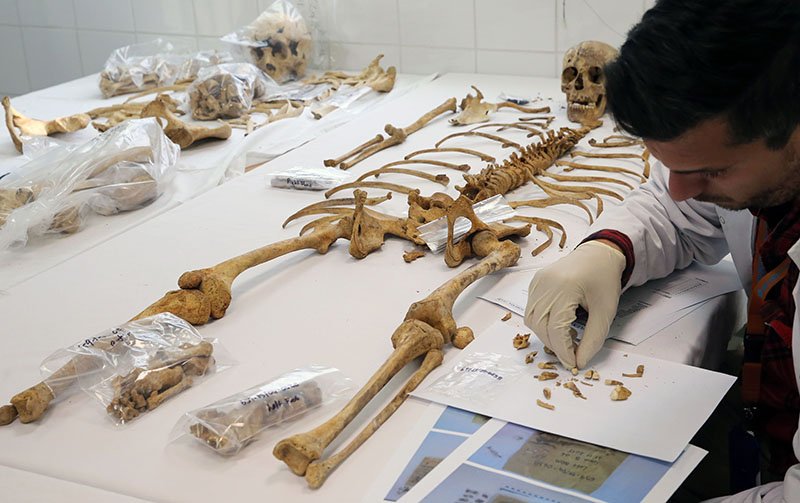 Humanitarian Affairs Commissioner Photis Photiou on Tuesday sounded the alarm to MPs on the slowdown in identifications of missing persons and called for a joint government-parliament meeting because time was running out.

He told lawmakers the remains of just eight people were identified by the Committee on Missing Persons (CMP) in the first five months of 2018 compared with 49 last year, and 114 in 2016.

Photiou was briefing the House refugee committee, where he said the slowing down of identifications was due to a lack of new information and Turkey’s stance on withholding its archives in addition to the fact that remains had been moved in several instances in the north over the years.

The committee also heard that the amnesty offered to people on both sides to come forward with information if they knew anything or were involved in any aspect related to missing persons, had been an abysmal failure.

“I have proposed a joint government-House meeting, with Greece, to see what further action we can take, how we can reinforce the political and diplomatic efforts on the subject of our missing people because the greatest enemy for this humanitarian issue is time,” Photiou said in statements after the meeting.

Photiou also said the moving of remains was a major crime.

Referring to developments at Dikomo in the north, he said there were two issues. One was how to support the CMP in a difficult excavation and secondly to evaluate the reliability of the witnesses who said there were remains of Greek Cypriots buried there.

It emerged this year that around 70 people from the Turkish occupied village of Ashia murdered during the 1974 invasion are believed to be buried at a now-restored landfill in Dikomo. According to witnesses, the remains were transferred there from the village of Ornithi. The relocation took place between 1995-1996. The landfill was closed between 2009-2012 as part of an EU-funded project to restore the area.

The EU was not aware of the issue at the time.

“There is also the political dimension and we will not accept to close this on the grounds that there are problems or that the information is not correct. That will never happen,” said Photiou.

The Greek Cypriot member of the CMP Nestoras Nestoros told MPs he had visited the UN HQ in New York to study their files. Access was also given to the British Red Cross’ archives and those of countries such as Finland, Canada and Sweden, all of whom had peacekeepers serving in Cyprus going back decades.

Nestoros said that confidential documents were evaluated by an archive expert who is hired for this purpose and requests their declassification if considered relevant.

He said that from 4,200 UN files looked at in New York, 988 were considered relevant and 410 were studied. From British records 490 were of interests and 281 have been studied so far.

He also said the amnesty in return for testimonies appeared to be ineffective.

“Amnesty does not work. The witnesses are not convinced,” he said.

According to House refugee committee chairwoman Skevi Koukouma the position of parliament was that the CMP must continue until the identification of all missing persons is completed.

“We believe that it is imperative for the CMP to continue operating,” she said.

“We are concerned about the reduction in the number of excavations that are effective, that is where remains are found and we need to see how the effort to gather proper information can be intensified”.

The number of Greek Cypriots identified so far is 659, with 851 still missing. There have also been 211 identifications of Turkish Cypriots, with 281 still missing.

“We have a deal,” Greece says on decades-old Macedonian name dispute