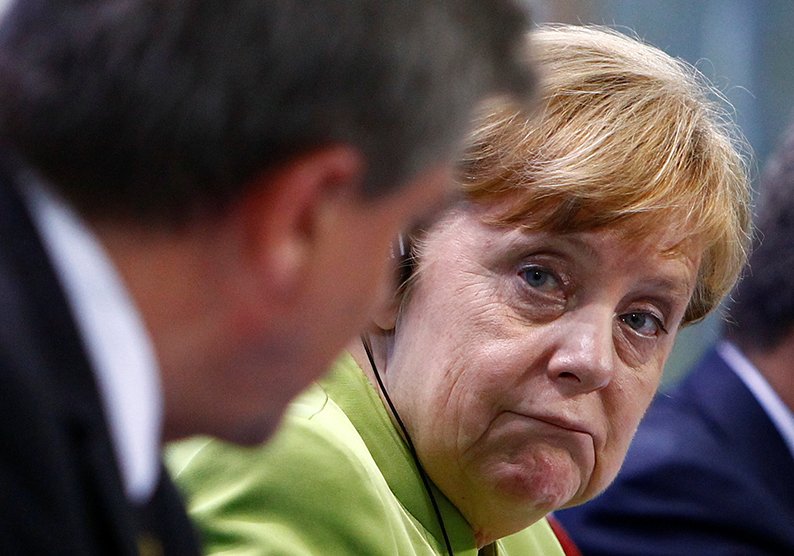 German Chancellor Angela Merkel faced a rebellion over migrant policy on Tuesday that risks destabilising her coalition, just as she is pushing EU partners to agree a common solution.

Merkel’s handling of the migrant crisis – which saw more than 1.6 million people arrive in Germany from 2014 and helped propel the far-right Alternative for Germany (AfD) into parliament – has come back to haunt her in the last few weeks.

On Tuesday, some senior members of Merkel’s Christian Democrats (CDU) opted to back her hardline Interior Minister Horst Seehofer, a Bavarian conservative who has long been a thorn in the chancellor’s side over migration.

Seehofer had been due to announce a “Migrant Masterplan” under which Germany would turn away at its borders those asylum seekers who have already been registered in another European Union state.

However, Seehofer had to cancel Tuesday’s presentation of the plan – which envisages fully reversing an open-door policy Merkel announced in 2015 – due to differences with his boss.

The alleged rape and killing of a 14-year-old German girl by an Iraqi man, extradited from Iraq on Saturday, has reignited the debate on migrants and followed a scandal at a regional office which wrongly granted asylum applications.

Seehofer, a former leader of the Bavarian Christian Social Union (CSU) which is facing a difficult regional election in October, wants to show he is toughening up the rules in his 63-point master plan.

Merkel objects to turning away asylum seekers at the border, fearing it could lead other countries to do the same. She is also trying to persuade other EU leaders to agree a common migrant policy at a summit this month.

However, a new anti-establishment Italian government is also vowing to turn away migrants – it has already forced one ship to divert to Spain – and it is unclear whether she will succeed. Eastern European EU countries also object to a proposal under which migrants would be resettled around the bloc under a quota system.

Merkel’s open-door policy for Germany has already been gradually scaled back and Christian Democrat General-Secretary Annegret Kramp-Karrenbauer, widely seen as a possible successor to Merkel, said the party’s leadership supported her position.

However, some other senior party members made clear they backed Seehofer. “As long as there is no satisfactory European solution, national measures must be possible,” said Mike Mohring, head of the parliamentary CDU group in the eastern state of Thuringia.

Saxony’s state premier, Michael Kretschmer, told Die Welt daily: “Of course, people who have no chance of getting asylum in Germany must be rejected at the border,” adding that this includes people who had applied for asylum in other countries.

The Social Democrats, the junior partner in Merkel’s grand coalition, have largely left the two conservative parties to fight it out between themselves.

However, the anti-immigration AfD said Seehofer must prevail. “Slowly but surely, the realisation is dawning on Europe that a European solution for the asylum crisis doesn’t work,” said one of the party’s leaders, Alexander Gauland.

“Italy is going further than other states: migrants will not be accepted in the ports any more. Other states will surely follow,” he said in a statement.

Kids find their imagination in the summertime