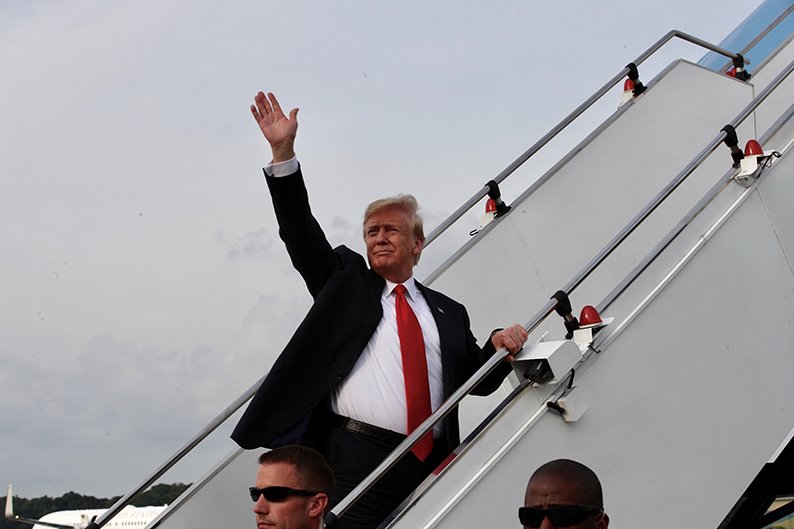 U.S. President Donald Trump on Tuesday kept up his feud with America’s closest allies over trade, saying he could not allow them to continue taking advantage of the United States.

Although he insisted he had a good relationship with Justin Trudeau, just days after blowing up a G7 summit the Canadian prime minister had hosted, Trump took another dig at him, saying the United States had a big trade deficit with Canada and that “a little balance” was needed.

Trump’s comments after a historic summit in Singapore with North Korean leader Kim Jong Un were the president’s most extensive on the matter since he tweeted that Trudeau was “very dishonest and weak” and raised the prospect of tariffs against auto imports, a move that would imperil the Canadian economy.

“We are being taken advantage of by virtually every one of those countries,” Trump told a news conference on Tuesday. “Look, countries cannot continue to take advantage of us on trade.”

Trump left a weekend Group of Seven summit in Canada early, then immediately announced he was backing out of a joint communique, torpedoing what appeared to be a fragile consensus on the trade dispute between Washington and its main allies.

The escalating clash cast a shadow over the Trump’s nuclear talks with Kim and led critics to question why the president was bashing U.S. partners while appearing to cosy up to one of Washington’s bitterest long-time foes.

Trump took time at his news conference to explain a photo that went viral from the G7 summit. It showed a seemingly glowering German Chancellor Angela Merkel and several other leaders appearing to confront a seated Trump.

“We finished the meeting, really everybody was happy, and I agreed to sign something,” Trump said. “And in fact the picture with Angela Merkel, who I get along with very well, where I’m sitting there like this … we’re waiting for the document because I wanted to see the final document as changed.

“I know it didn’t look friendly,” Trump said. “I know it was reported sort of nasty both ways – I was angry at her, or she. But actually we were just talking, the whole group, about something unrelated to everything, very friendly.”

Trump said he decided to back out of the G7 communique after watching Trudeau’s closing summit news conference, at which he warned that Canada would not be pushed around on tariffs – a point the Canadian prime minister had made several times before.

“He’ll learn that’s going to cost a lot of money for the people of Canada. He’ll learn, he can’t do that,” Trump said.

Trump fired off a volley of tweets on Monday further venting anger at NATO allies, the European Union and Trudeau. Some of Trump’s aides also lashed out at the Canadian prime minister.

Trump’s extraordinary outburst in recent days appeared aimed at striking a chord with voters who support his “America First” agenda. “Not fair to the people of America! $800 billion trade deficit,” he tweeted on Monday.

In the same set of tweets, Trump said: “Justin acts hurt when called out!”

On Tuesday, Trump said: “We have a big trade deficit with Canada … it’s close to $100 billion a year deal loss.”

However, the office of the U.S. Trade Representative has said the United States ran an $8.4 billion trade surplus with Canada in 2017.

Canadian officials have stressed the two countries’ extensive trading relationship and pointed out that Canada is the top export destination for 35 U.S. states and that 9 million jobs in the United States depend on trade with its northern neighbour.