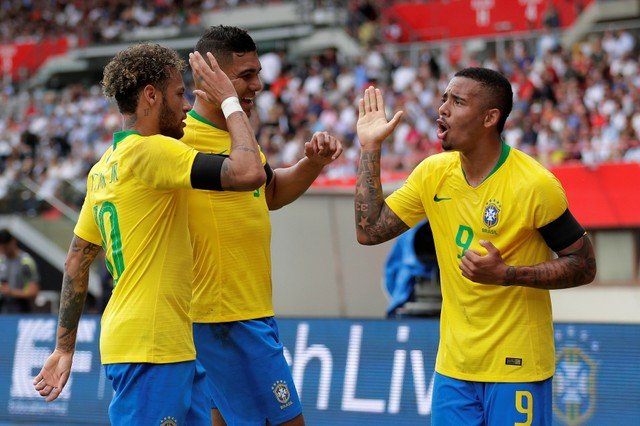 Whether you like an occasional flutter or are a hardcore gambler it is probably time to start scrolling down all the form guides. Let’s have a quick look at the pre-tournament favourites:

BRAZIL – 9/2
The present favourites are coming good at the right time and have a point to prove and a score to settle. However they may need Neymar Jr to stay fit to realise their dream.

GERMANY – 5/1
They always play percentages to the maximum. The selection of Manuel Neuer or not will be a big call. Neuer is very influential but can he be fully match fit? Will opponents have worked out how to play Germany (like Austria)?

SPAIN – 13/2
Strength and quality in depth with Andres Iniesta looking to exit international football on a high. Their attacking forward options seem to be a bit limited when compared to some top teams and it looks as if they will depend on providing chances from midfield areas for Diego Costa. It will be interesting to see what attention the FIFA referees give Sergio Ramos.

ARGENTINA – 10/1
If ten of their players can show the committment, determination, flair and discipline to do their jobs and Lionel Messi does what he does best then the World Cup could be there for the taking?

Smyth’s ‘Worth a Punt’

FRANCE – 7/1
They have an abundance of talent. Can France defend? Can Hugo Lloris avoid any clangers and step up to be a world-class goalkeeper against the big teams? And can Didier Deschamps motivate and get the best out of his players?

BELGIUM – 11/1
They have all the ingredients to progress to the latter stages of the World Cup, but Roberto Martinez is now questioning their confidence against big teams, which is not good. They will need midfield players to score goals as well as the forwards and the manager must select the right team.

ENGLAND – 20/1
Will hope that playing in the Premier League rubs off on as many players as possible. This is a young team who have to deal and cope with the burden of expectation which no England team from 1966 has managed to do.
The goalkeeper is an unknown quantity and he must hit the ground running or the wheels could come off quickly. Harry Kane will need to be scoring from the off to give England any chance of progressing to the latter stages.

URUGUAY – 33/1
They have an impressive World Cup history. Edinson Cavani and Luis Suarez are in a good vein of form and could be game changers.

SENEGAL – 475/1
They possess plenty of talented individuals who if they can gel as a team could cause a few upsets and progress to the knockout stages. Sadio Mane has proved that he can score goals at the highest European club level.

It is always easier to pick those players who are considered to be the obvious candidates. To have a chance, potential Golden Boot winners will need to start scoring from the off. The quality of their own team and their opponents in the group stages may well influence who is to be the 2018 winner. Cristiano Ronaldo will not be happy at all to come behind Lionel Messi, Neymar Jr and Antoine Griezmann in the early pre-tournament betting odds.

I am choosing to look away from the perceived betting favourites as follows:

KEVIN DE BRUYNE – 125/1
He has been magical and consistent under the guidance of Pep Guardiola and I like the odds. With Axel Witsel beside him he will be able to drive forward and he is more than capable of scoring goals, both simple and the spectacular. Don’t think too much, just do it!

OLIVIER GIROUD – 50/1
He has risen to new heights since moving to Chelsea and is performing at the top of his game. Has many providers in the French midfield and if you give him chances he will score.

SERGIO AGUERO – 33/1
He is another player to improve and benefit from the guidance of Pep Guardiola. He will have many providers from the Argentine midfield including Messi and he will be a lethal goalscorer if he can quickly get into the groove.

ROBERTO FIRMINO – 80/1
He will definitely be a long shot but is a proven uncomplicated goal scorer at the highest European club level. If he is selected by Brazil he will score goals

Of course predictions can look pretty foolish after a couple of matches have been played but isn’t that the nature of the game?

(Odds correct at time of writing)