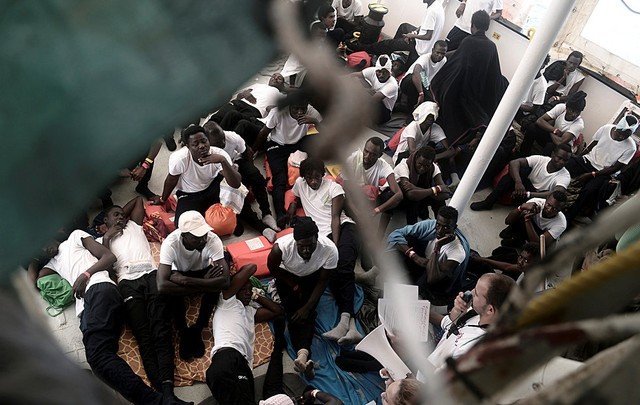 Migrants sit on the deck of the MV Aquarius, a search and rescue ship run in partnership between SOS Mediterranee and Medecins Sans Frontieres in the central Mediterranean Sea

Italy said on Wednesday its decision to shut its ports to hundreds of migrants aboard a charity ship was firm, as a clash between Rome and Paris over migrant policy heated up.

“We will not change (our position) on ships belonging to non-governmental organisations,” Interior Minister Matteo Salvini said in an interview with the Corriere della Sera newspaper.

Since Sunday, when both Italy and Malta refused to let them dock, some 629 migrants, including 11 children and seven pregnant women, have been in the central Mediterranean aboard the Aquarius.

Some of the migrants on the overcrowded Aquarius, who are mostly from sub-Saharan Africa, were moved onto to two Italian ships from the navy and coastguard and are headed for the port of Valencia, Spain.

The episode, coming a week after the installation of Italy‘s new populist government, has heightened tensions within the European Union over migration.

While Spain adopted a diplomatic tone with Italy when it announced it would take the migrants, relations between Rome and Paris have deteriorated in an explosion of accusations and counter-accusations.

“There is a degree of cynicism and irresponsibility in the Italian government’s behaviour with regard to this dramatic humanitarian situation,” government spokesman Benjamin Griveaux quoted Macron as telling his cabinet.

Italian Prime Minister Giuseppe Conte, who is due to meet Macron in Paris this Friday, shot back.

“Italy cannot accept hypocritical lessons from countries that have always preferred to turn their backs when it comes to immigration,” Conte said in a statement.

The situation escalated on Wednesday morning when Rome’s foreign ministry summoned the French ambassador for an explanation of Macron’s comments.

“If the French have the humility to say they are sorry, we can put it behind us and be friends like before,” Salvini told reporters on the sidelines of a business conference.

Also on Wednesday morning, an Italian coast guard vessel with 937 migrants aboard docked in Catania, Sicily.

Transport Minister Danilo Toninelli said the fact that migrants rescued by Italian ships were landing in Italy showed that the government was not “inhumane or xenophobic”.

Italy has taken in more than 640,000 mainly African migrants and refugees over the past five years. Other EU states have largely ignored pleas by Rome to take in some of the newcomers and share the cost of their care.

Several EU countries have, however, housed migrants who entered the bloc via other routes, with Germany admitting more than a million people in recent years.

Salvini’s League scored its best-ever result in March national elections, partly on pledges to deport hundreds of thousands of migrants and halt the flow of newcomers, and has formed a coalition with the anti-system 5-Star Movement.