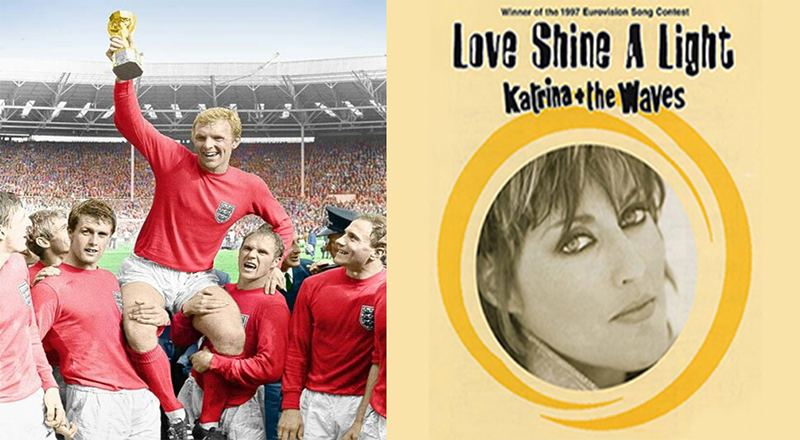 The last time England won the World Cup was in 1966, while their last Eurovision song contest win was in 1977

“Football is a simple game. Twenty-two men chase a ball around for 90 minutes and at the end, the Germans win.” Gary Lineker

With qualification long gone and warm-up games over we look forward to the kick-off of World Cup 2018 in Russia.
Like a good coffee you hope the cream rises to the top… and NO parking buses!
Russia can only hope to exceed modest expectations on home soil, considering a somewhat less than impressive recent match record (maybe a win and a draw would be good or even a miracle?) and as the first whistle approaches the UK media are already building up the hype on England.

I do not like to see England’s kids being set up to make big pre-tournament statements.
Do England honestly have more of a chance of winning the World Cup than the UK in the Eurovision Song Contest?

As for Brazil, their first goal is to have a rematch with Germany, which looks to be a distinct possibility.
Spare a thought for ‘not so poor’ old Cristiano Ronaldo who is presently fretting and sulking over his failure to get pay parity with Lionel Messi or Neymar Jr, the latter who may even replace him at Real Madrid? That would add some spice to future ‘El Clasicos’.
As we look for omens to point us towards the next world champions, I guess you could start with previous World Cup years ending with an ‘8’, which I am sure someone will highlight – 1958, 1978 and 1998?

In 2018 will Brazil’s next Pele please take the stage?

I am in no doubt that the mercurial Messi can have the same impact as a Super Mario (Kempes), although a shave might help and a skinhead cut could rid us of the grossly over self-indulgent Paul Pogba hairstyles and maybe prompt a bit more Zidane, Henry or Vieira from him?
Before we get too carried away with France just think about the English Premier League for a moment; City, United and Chelski have understood the importance of a world class ‘stopper between the sticks’ and could that be why Tottenham and Liverpool haven’t won anything?

This should be the first question to be asked of the England team: “how good is the stopper?”
I am not convinced that Gareth Southgate knows his best keeper and none of the three England goalkeepers play for a ‘top six’ Premier League football club.

I believe the manager was right not to select Joe Hart in the England squad, but who is selected for the World Cup is a very big call. As he seems to struggle with his own identity by appearing to try to morph into becoming the next Terry Venables, Gareth was allegedly considering reinventing the infamous England ‘dentist’s chair’, but unfortunately he has no Gazza characters in the squad.

Then there is a rumour that the English FA decided in their wisdom that a World Cup anthem would not be considered to be PC! If true, how sad is that? Please bring back Baddiel and Skinner with their ‘Three Lions’ or I’m sure a Robbie Williams ‘Rock DJ’ would rouse the England fans.

The World Cup hasn’t started yet but the first awards are for ‘Best Kit’ and ‘Worst Kit’.
The nominees for the Best Kit are (1) France (with panache), (2) Brazil (well they are Brazil) and (3) Nigeria (colourful or comical?) and the winner is ‘Les Bleus’.

The nominees for the Worst Kit are (1) Colombia, (2) Belgium and (3) Spain (who look like their shirts were driven over by a 4X4) and the winner is Belgium by a nose from Spain.

I had sort of fancied Belgium from the off to have an outside chance at the last World Cup but I am old enough to remember ‘The Fall and Rise of Reginald Perrin’ on TV and I couldn’t stop seeing Manager Marc Wilmots in my mind as Reggie Perrin which for me simply shattered their ‘street cred’.

They move on with a new manager and then what about that kit? Did I say kit or kilt?
The pattern is Argyle derived from 17th century tartan of Clan Campbell in western Scotland. Such is the origin of funky kilts and Highlander socks. If Belgium or Spain has a bad result you will have to say “It’s the shirts boys!” Could this even be a cunning ploy by a sportswear company?

I feel the need to ramble for a minute or two and give Liverpool supporters a quick mention, who have recently been appearing out of the woodwork en masse leading up to the Champions League Final, only to vanish again chastened no doubt by chirpy Man U fans who themselves had been put in their place by their noisy neighbours.

I hope Jurgen Klopp (who may yet desert the sinking ship a la Suarez and Coutinho for Spain) doesn’t take the words of Liverpool legend Bill Shankly too much to heart?
“If you are first you are first. If you are second you are nothing”.

I digress.. well back to World Cup matters and who will be missed most from this year’s competition? The World Cup will not be the same without the orange of The Netherlands and The Azzurri, but at least they will not have to race the Germans to put towels on sunbeds for a month. Also I’m sure that Mr Putin would have loved to face the USA team and dear old Donald on home soil!

Well we started with world champions Germany and I guess this is where we should finish. Surprise surprise the Germany team looks much the same as per usual and it probably makes sense to them not to change a winning formula or their almost robotic organisation.

There are not so many new faces and hopefully Mesut Ozil will manage to look less unhappy than he does playing for the Gunners. I never understood how it was possible to look so miserable or disenchanted on such a mega salary.

However another Germany win could only be considered to be a triumph for efficiency over raw talent. I did have the privilege of watching the magical George Best grace Windsor Park and he had the ability to make the hairs on the back of your neck bristle and stand up. I presume some of today’s pampered stars could only offer their fans some premium brand hair gel.

Anyway in the words of basketball legend Shaquille O’Neal: “Opinions are like belly buttons, everybody has one. I never knock a man for his opinion.”