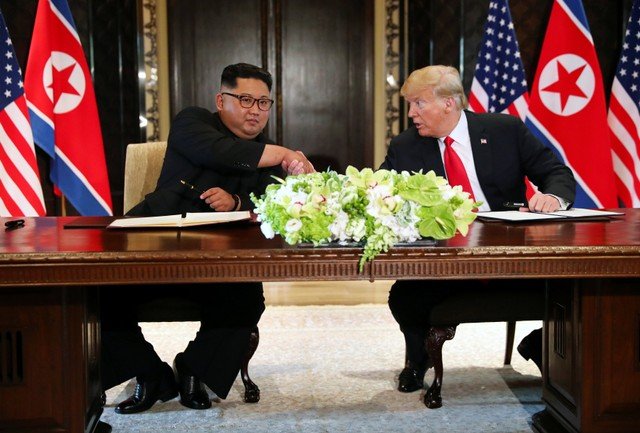 U.S. President Donald Trump shakes hands with North Korea's leader Kim Jong Un after signing documents that acknowledge the progress of the talks and pledge to keep momentum going, after their summit

IF THE Singapore meeting between Donald Trump and Kim Jong-un had been a zero-sum game, then Trump definitely lost. But maybe it wasn’t.

Kim got a meeting with Trump on terms of strict equality right down to the number of flags on display, which is a huge boost for his regime’s claim to legitimacy. He persuaded Trump to end America’s annual joint military exercises with South Korea (and even got Trump to call them ‘war games’ and say they were ‘provocative’, which no US spokesperson has ever done before).

This is several light-years distant from Secretary of State Mike Pompeo’s pre-summit definition of the US goal as “permanent, verifiable, irreversible dismantling of North Korea’s weapons of mass destruction,” which must happen “without delay.”

There’s no cause for surprise here. Trump is not a great deal-maker; he’s a man who is accomplished at playing the role of a great deal-maker. The reality is more like the contract he signed with Tony Schwartz, who ghost-wrote ‘The Art of the Deal’, the book that made him famous: 50 per cent of the advance, 50 per cent of royalties, and equal billing on the cover. Schwartz was as surprised and pleased then as Kim undoubtedly is now.

If Trump had had a little more time in Singapore, he could have bought a T-shirt saying ‘My president went to Singapore and all I got was this lousy T-shirt’ and taken it home to give to the American people.

He would have needed a bigger apology-gift for the South Korean government, which was blindsided by Trump’s spur-of-the-moment promise to stop the joint military exercises. “We need to find out the exact meaning or intention behind his comments at this point,” Seoul said in an unmistakably sulky tone of voice. (Seoul’s mistake is to assume that Trump himself knew his “exact meaning or intention.”)

But this was not really a negotiation. It was a show, staged for the benefit of the two main participants, and they both got what they came for. They were bound to get it, since they had the power to define the meeting as either a success or a failure. Naturally, they said it was a success – but that doesn’t mean it was actually a failure.

All this zero-sum game nonsense is irrelevant to what is really happening here, or at least could happen in the months to come: the gradual acceptance by the United States that North Korea is irreversibly a nuclear weapons power, although a small one, and the negotiation of some basic rules for this new relationship between two nuclear powers of radically different size.

Diplomatic and military experts have been saying for years that there is no way that North Korea will ever give up its nuclear weapons. The whole country lived on short rations for a generation to get them, and Kim is well aware of what happened to dictators who didn’t have nukes, like Iraq’s Saddam Hussein and Libya’s Muammar Gaddafi.

The experts are right, but they do not see this situation as necessarily a cause for panic. After all, more evenly matched pairs of nuclear powers, like India and Pakistan, or the United States and Russia, have managed to avoid nuclear war for decades. Nuclear deterrence, as Bernard Brodie pointed out more than 70 years ago, works even when there is a huge disparity in the number of weapons possessed by the two sides.

If North Korea has even a marginal ability to destroy one US city with a nuclear weapon, the United States is effectively deterred from using nuclear weapons against it. (Except if the US could count on destroying every one of Kim’s nuclear-tipped missiles in a surprise first strike – but that’s why North Korea will move them around or dig them in deep.)

North Korea is and will remain totally deterred from attacking the United States, because it would be utterly destroyed in a massive American counter-strike. So the deterrence is mutual and relatively stable, barring huge technological surprises or crazy or suicidal leaders.

That is the destination the US-North Korean relationship is heading for, because it is the only one that reality permits. Kim is almost certainly seeking it quite consciously, although it’s unlikely that Trump has ever thought of it in these terms. Indeed, there is some evidence that he is not even clear on the basic concept of deterrence.

No matter. That’s what Trump is heading for, and by the time he gets there he will undoubtedly think that it was his goal all along. There will be more meetings, probably including a Kim visit to the White House, and the two countries will move, slowly and crabwise, towards the mutual deterrence that will define their future relationship.

House to vote on paternity leave, benefits for unmarried fathers