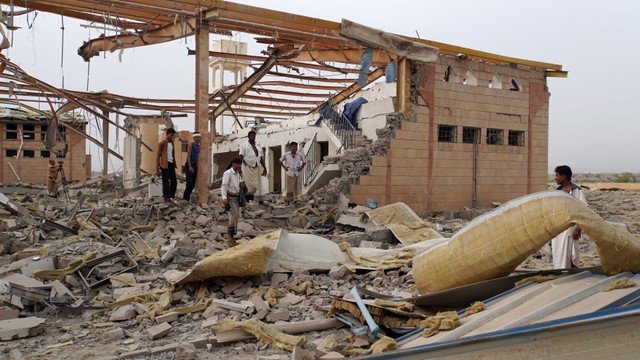 People inspect damage at a Doctors Without Borders medical facility after it was hit by an air strike in Abss, Yemen

Arab warplanes and warships pounded Houthi positions in Yemen‘s Hodeidah for a second day on Thursday, as a Saudi-led alliance tried to seize the main port in the largest battle of a war that has created the world’s worst humanitarian crisis.

The United Nations is struggling to avert disruption to the port, the main lifeline for food aid to a country where 8.4 million people are on the verge of starvation in what potentially would be the world’s worst famine for generations.

The Iran-aligned Houthis control the capital and most of Yemen‘s populated areas. The Arab states have been fighting since 2015 to unseat them, restore an exiled Saudi-backed government and halt what they see as Iranian expansionism.

“People are scared. The warships are terrifying and warplanes are flying overhead all the time,” university student Amina, 22, who lives near the port, told Reuters by telephone.

“People are fleeing the city to the countryside, but for those with no relatives there or money, there is no escape.”

Capturing Hodeidah, the Houthis’ only port, would give the coalition the upper hand in the war, in which neither side has made much progress for years.

Western countries have quietly backed the Arab coalition, but the threat of humanitarian catastrophe on an historic scale could unravel that support. The United Nations says 22 millionYemenis need humanitarian aid.

The number at risk of starvation could more than double to more than 18 million by year end, unless the situation improves.

The United Nations said it was still be bringing aid: “We are there and delivering, we are not leaving Hodeidah,” UN humanitarian coordinator for Yemen Lise Grande said.

The Arab states say they have plans in place to prevent the battle from causing a humanitarian disaster. They have long been restricting imports into Hodeidah to prevent what they say is Iranian traffic in missiles to the Houthis, and say they can swiftly improve food supplies once they control the port.

Ali al-Ahmed, the Emirati Ambassador to Germany, told Reuters there were 60,000 tonnes of humanitarian aid ready on ships and trucks to move into the region once the fighting died down. He said it would take Arab forces about 72 hours to clear mines from Hodeidah’s port or airport once it captures them.

“It’s very important for our credibility to make sure that people in need get the help they need,” he said.

The war in Yemen is one of several regional conflicts that pit allies of the Sunni Muslim Arab states against forces aligned to Shi’ite Iran. The Houthis, from a Shi’ite minority, deny being Iran’s pawns and say they took power in a popular revolt and are defending Yemen from invasion by its neighbours.

The UN Security Council is due to meet behind closed doors on Thursday, at the request of Britain, over the offensive. The UN special envoy to Yemen, Martin Griffiths, has said the world body is talking to both sides to de-escalate.

Houthi leader Mohammed Ali al-Houthi has blamed the West for the assault: “The British told us a week ago that the Emiratis and the Saudis had told them they would not enter the battle of Hodeidah without their agreement and assistance.”

A Houthi statement warned commercial ships in the Red Sea, one of the world’s most important trade routes, to stay 20 miles from coalition warships or potentially face attack.

“The enemy has heightened the risk in the Red Sea with this new battle and is responsible for the consequences. We will not stand by idly in the face of the most dangerous foreign assault which threats millions of Yemenis.”

Foreign Secretary Boris Johnson said on Wednesday the British government was in contact with the alliance about ensuring its operations comply with international law on protecting civilians.

Coalition spokesman Turki al-Malki has said operation “Golden Victory” aimed to wrest control of the port and airport, but that troops would avoid entering the city.

Emery’s baptism of fire as Arsenal open against champions City