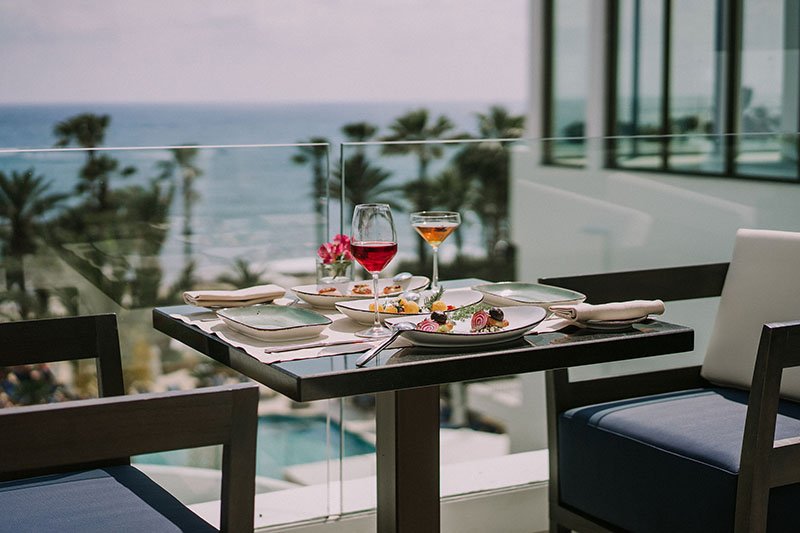 There is a common understanding that for a business to continue to thrive it must evolve to suit consumers’ taste and present new products. The Annabelle Hotel, which was the first five-star hotel in Paphos, has just pulled off such an evolution with the opening of its new Ouranos Restaurant and Bar as part of its €10 million renovation. The hotel has created a restaurant and cocktail bar on the top floor of its newly-built extension stocked with no less than 45 different varieties of gin and 25 malt whiskies.

As such, the restaurant offers superb views of the sea and the sleek interior is as impressive, having been designed by an interior designer from Paris. The restaurant is managed by mixologist Alexandros Mavrikis.

Alexandros comes originally from Athens and has practised the art of mixing cocktails all over the world in and is able to describe a drink in terms of flavour, suitable foods to accompany it and alcohol content in addition to suggesting new mixes for old classics. The Scottish gin & tonic he mixed for my friend was like no g&t he had ever tasted before and having polished one off, demanded another surprise mix which was duly delivered.

Chef Laurent Brun has designed a menu to echo the concept of tapas, eating small samples of the very best food from Cyprus and the world – “a combination of world cuisine using new techniques”. From an extensive menu of over 28 savoury dishes including meat, fish and vegetables, our party selected several platters.

We all enjoyed the Kushi chicken which had Japanese yakitori, spring onions, mirin and soya sauce; tuna maguro which was flamed sashimi with sesame ponzu sauce; Andalusian-style sautéed prawns; Lima scallops with red chilli and fresh coriander and seared black angus tataki with oyster sauce. The black angus was our favourite dish as it was very different from any beef we had previously tasted and quite literally melted in the mouth. The food was excellent, beautifully presented and surprisingly plentiful. It is most definitely a different take on traditional dishes. Vegetarians are very well catered for with many vegetable and cheese dishes ranging from spanakopita, a spinach and cheese pie, to pilpal, which is crispy falafel with cumin and coriander plus many more options.

For the final course there is choice of 12 desserts under four headings which should appeal to all – Tea, Herbs, Nuts and Chocolate. We indulged in a pistacia, which is a raspberry and pistachio cake. The Chengdu, a dark chocolate and Szechuan pepper tart was especially delicious with the wonderful combination of sweet and spicy.

Ouranos is definitely the latest place to be seen in in Paphos and on the night we dined there it was very busy with trendy locals and hotel guests, so booking would be advised. They hold regular entertainment nights with live singing and DJs. Definitely the new hot spot for Summer Nights of eating and drinking in style in Paphos. Mentioning style, they have a very strict dress code of smart casual for dinner which means no shorts, flip flops or sports attire.