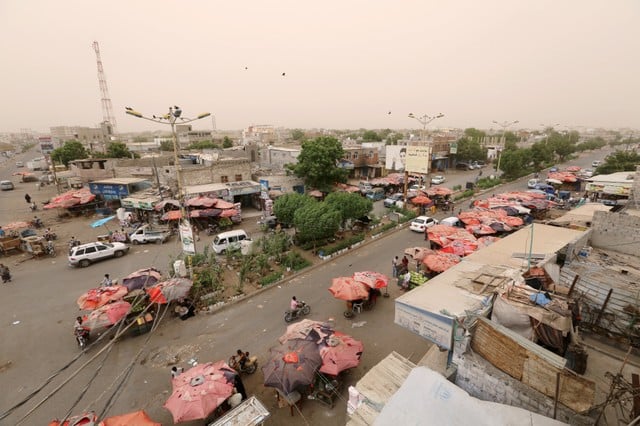 View of the Red Sea port city of Hodeidah

Forces from a Saudi-led coalition were poised to enter the airport of Yemen‘s main port, Hodeidah, on Friday as the Arab alliance prepared to seize the city in the biggest battle of a three-year war.

Coalition warplanes pounded coastal areas southeast of the Houthi-held city as residents marked the end of the holy fasting month of Ramadan by gathering at dawn in an open area for Eid al-Fitr prayers.

“Many warplanes were flying low over the city during the prayers,” one resident of the heavily defended city said.

Forces of the western-backed coalition, led by Emirati troops, have advanced to within metres of the airport, Saudi-owned Al Arabiya television quoted Yemeni military officials as saying.

Warplanes also struck the main road linking Hodeidah to the capital Sanaa to block reinforcements to the Houthis, the Iran-aligned movement that controls the capital and most of Yemen‘s populated areas.

The United Nations, which says the war has created the world’s most pressing humanitarian crisis, is struggling to avert disruption to Hodeidah.

The port is the main lifeline for food aid to a country where 8.4 million people are facing starvation. A UN diplomatic source said five commercial vessels were offloading at the port.

“I urge all parties to the conflict to meet their obligations to protect civilians and civilian infrastructure and take active steps to respect international humanitarian law,” David Beasleye, executive director of the UN World Food Programme, said in a statement.

Capturing Hodeidah would give the Arab coalition the upper hand in the war, in which neither side has made much progress since it intervened in 2015 to restore the internationally recognised government in exile.

Many residents have fled the city.

“My family left for Sanaa yesterday but I stayed behind alone to protect our home from looters,” said Mohammed Abdullah, an employee of the Houthi administration.

The United Nations says 22 million Yemenis need humanitarian aid and the number at risk of starvation could more than double to more than 18 million by year-end unless access improves.

Coalition leaders Saudi Arabia and the United Arab Emirates say there are plans to prevent the battle from worsening the humanitarian disaster and they will be able to improve food supplies once they control Hodeidah, the Houthis’ only port.

The Houthis, from a Shi’ite minority, deny being Tehran’s pawns and say they took power in a popular revolt and are defending Yemen from invasion by its neighbours.

Houthi leader Mohammed Ali al-Houthi called on his followers late on Thursday to head to the frontlines to fight the “instruments of the United States and Israel”.

“The Yemeni coast has been a strategic target for the invaders throughout history and confronting the aggression is a national duty in the face of the danger of foreign occupation.”

The Western-backed alliance says capturing Hodeidah would deprive the Houthis of their main source of income and prevent them from bringing in missiles, dozens of which have been fired at Saudi Arabia.

The United States and other Western powers provide arms and intelligence to the coalition. Human rights groups criticise them over air strikes that have killed hundreds of civilians.

The United States rejected a request from the UAE for intelligence, mine-sweeping and airborne intelligence, surveillance and reconnaissance (ISR) assets for the Hodeidah operation, a UAE official said, speaking on condition of anonymity, while noting congressional opposition.

However, the official said France had agreed to provide mine-sweeping support for the operation. The UAE has said the Houthis could plant land and sea mines at the port.