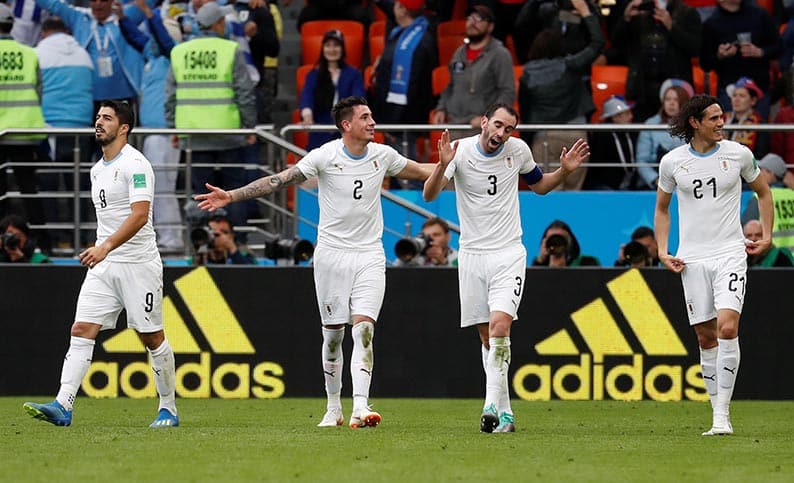 Gimenez celebrates with Suarez, Godin and Cavani after scoring their first goal

Uruguay’s Jose Gimenez scored with a thunderous 89th-minute header to deal Egypt a 1-0 defeat in their World Cup opener on Friday, just as the North Africans appeared to have escaped with a point despite missing key striker Mohamed Salah.

Gimenez rose perfectly to meet a Carlos Sanchez free kick and score the goal that broke a 48-year Uruguayan curse of failing to win their opening game at World Cup finals.

“In the history of football we have broken a spell,” said Uruguay coach Oscar Tabarez.

“We either die or we kill, we have to keep progressing,” he told reporters after a result that improved Uruguay’s already strong chances of advancing to the last-16 stage from Group A which also includes hosts Russia and Saudi Arabia.

Egypt came within minutes of surviving largely thanks to the heroics of goalkeeper Mohamed El-Shenawy, who bravely dived to snatch the ball from Luis Suarez’ feet and flung himself through the air to tip a Edinson Cavani volley wide.

Cavani also hit the post as Uruguay gained in strength and purpose the longer the game progressed, seemingly buoyed by the realisation that Salah would not even make an appearance from the bench.

Until Uruguay’s second-half surge, Egypt had rarely looked in trouble in a scrappy match at the less-than-packed Yekaterinburg Arena, though without Salah they also did little to threaten their opponents’ goal.

Speculation over the Liverpool striker, who injured his shoulder in the Champions League final against Real Madrid last month, had dominated the build-up to the match and obsessed the several thousand Egyptian fans who travelled to Yekaterinburg from as far afield as Texas and Sydney.

“Perhaps if Mo had been on the pitch today, the outcome would have been different but we can’t know that,” Egypt coach Hector Cuper told reporters.

The man who scored 44 goals for Liverpool last season would be fine for the next match against Russia, Cuper said, but he had decided after training on the eve of the Uruguay game not to take a risk with his talisman.

“At the end of the training session we examined him and there was some doubt if he fell or was hit by another player, and we wanted to avoid a risk today,” Cuper said. “We want to have him in top form for Russia and Saudi Arabia.”

For Uruguay, Suarez had a disappointing match with several missed opportunities. In the first half he fired into the side-netting when he found himself unmarked after the ball broke loose after a corner, but he forced a good save from El-Shenawy in the opening moments of the second period.

“Suarez, as you say, was not playing as well as he normally does but he had three scoring opportunities… the goalkeeper saved a couple of them. That happens to strikers,” Tabarez said.

“In good times, everything goes into the back of the net while at other times the goal seems smaller. As long as he gives his all, we are happy.”

Egypt next play Russia in St Petersburg on Tuesday, giving Salah four more days to work on his fitness while Uruguay take on Saudi Arabia on Wednesday in Rostov.