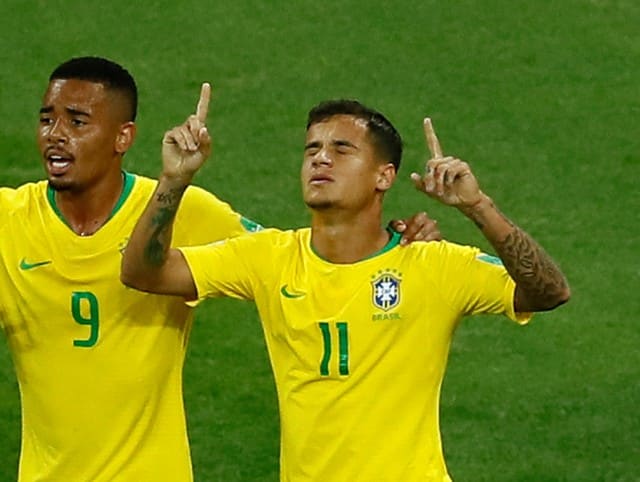 Brazil joined the host of big guns who have failed to fire in their opening World Cup game as lax defending from a corner allowedSwitzerland to cancel out Philippe Coutinho’s spectacular curling strike and grab a 1-1 draw on Sunday.

The five-times world champions took a deserved lead midway through the first half in the Group E game when Coutinho’s irresistible long-distance shot cannoned in off the far post, but Tite’s side, who had looked so impressive in the tournament build-up, failed to build on their advantage.

The highly organised Swiss hit back early in the second period from one of their few chances as Brazil‘s Casemiro and Miranda switched off and the unmarked Steven Zuber barely had to leave his feet to nod in Xherdan Shaqiri’s whipped corner.

Brazil went all out in pursuit of a winner and came agonisingly close to finding it but had to settle for a point and joined fellow tournament favourites Germany, Spain and Argentina in failing to win their first game.

Neymar’s flamboyant blond ‘spaghetti’ haircut certainly caught the eye although he only gave glimpses of the spectacular dribbles and plays he is renowned for and which led Paris St Germain to shell out 222 million euros for.

They foolishly offered him the chance to demonstrate his most spectacular quality, however, when a cross from Marcelo was cleared into the path of the Barcelona midfielder, who wrapped his right foot around the ball and delivered an irresistible finish to break the deadlock in the 20th minute.

The whirlwind finish delighted the Rostov Arena, where yellow-shirted Brazil fans vastly outnumbered the red of the Swiss, although Tite’s side failed to build further momentum, as Neymar was frequently stopped in his tracks by tactical fouls from Vladimir Petkovic’s side.

The PSG forward, who was making only his second start since a metatarsal injury ended his season in February, did not look as if he had fully recovered, as his coach had warned on the eve of the game by admitting his side’s talisman was “not 100 percent”.

Still, Brazil always looked in control until they ceded a corner and Zuber took full advantage of their collective lapse of concentration.

They made a far bigger effort than the Swiss to find a second goal and were not far from finding it.

Coutinho and Miranda each lashed wide from inside the area while Neymar and substitute Roberto Firmino were denied by Swiss goalkeeper Yann Sommer.