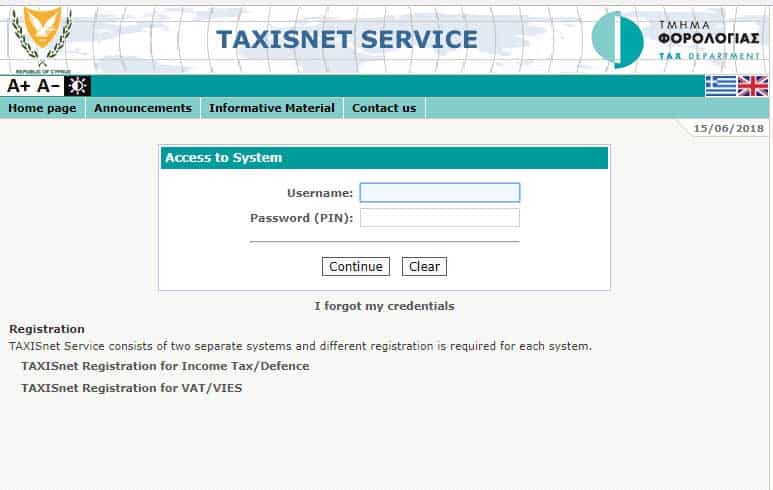 Very recently, the Cyprus Tax Department published a guide for the online completion of an employee’s income tax return, relating to taxable income generated in 2017. Originally, the return had to be filed electronically through Taxisnet by July 31, 2018 but the reporting deadline (for salaried taxpayers and self-employed taxpayers having gross fees of up to €70,000) has been recently extended to October 31, 2018. For these groups, the avoidance of the payment of fines and penalties entails the payment of any taxes due by October 31, 2018.

On page 17, the guide informs taxpayers that they may reduce their taxable income (by reference to which income tax is quantified) by claiming tax relief for contributions they may have made to Cyprus political parties. It is true that the relief is confined (sic) to €50,000! In fact, even people who do not have a clean criminal record (such as drug dealers) may claim the relief. It must be said, however, that in these cases the relief given (per taxpayer, per year) is confined to €5,000.

In contrast, the amounts paid for the treatment of serious illnesses (suffered by the taxpayer or his dependents) does not give any tax relief.

The above provision was enacted by the House of Representatives in 2015 (L.171(I)/2015), as an amendment of the Laws Regulating Political Parties in Cyprus but had gone largely unnoticed. By this legislative provision, the members of parliament have effectively shifted part of the tax burden from the financial sponsors of political parties to the ordinary taxpayers, who pay their taxes regularly.

I suppose it would be reasonable to assume that these political sponsorships will ultimately be linked to a tangible gesture of appreciation.

The story set out above highlights the broader problem that confronts Cyprus, namely the effective vote fishing on the part of politicians through various “schemes” that without exception have had devastating consequences.

A good example of the destructive effect of the approach taken was the thunderous “No” to the first proposal made for dealing with the ailments of the Cyprus banking system, which led to the closing of the Popular Bank and the loss of 47.5 per cent of all the Bank of Cyprus deposits above the €100,000 threshold. Another good example of this attitude is our MPs’ insistence on protecting the delinquent borrowers, resulting in the perpetuation of the problem of non-performing bank loans. In the case of the Co-operative Bank, the cost of this attitude is already being passed on to the taxpayers. If this attitude persists, it is not inconceivable that we will face a new “haircut” of bank deposits.

Our MPs find it equally easy to encourage and support the demands of organised groups, which are in a position to exercise political pressure, while the weak elements of society (such as old-age pensioners) remain at the mercy of the better-organised classes.

In my opinion, there is only one method for liberating society from these ugly political phenomena. That is the passage of a law that would stipulate that all state deficits (including those associated with the semi-governmental organisations) should be apportioned equally amongst the members of the House of Representatives and should be covered out of their personal wealth. This is the only way of forcing our MPs to focus on how to save, rather on how to spend, money.

Of course, the difficult question here is who would enact such a law?

Refugees: a call for acceptance, inclusion and solidarity