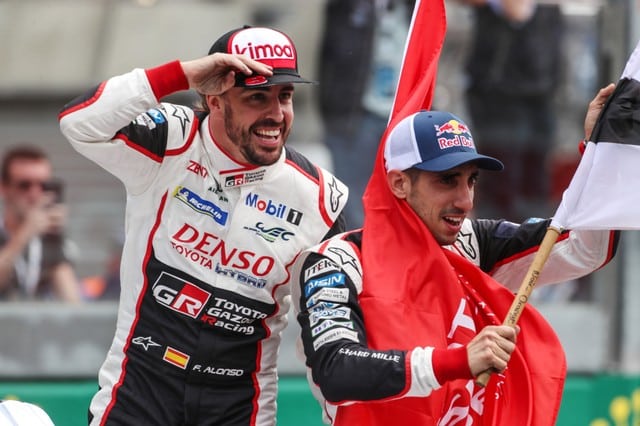 Toyota ended years of heartache by winning the Le Mans 24 Hours race in dominant fashion on Sunday, with double Formula One world champion Fernando Alonso victorious on his debut and now one step away from the Triple Crown of Motorsport.

Expected to dominate the 86th edition of the race, as the only major manufacturer in the top LMP1 category after champions Porsche withdrew last year, Toyota’s victory came at the 20th attempt.

With a one-two finish they became only the second Japanese car company, after Mazda in 1991, to win the world’s greatest endurance race.

“It’s a shame the 24 Hours of Le Mans only happens once a year. They should hold it every two or three weeks,” said Alonso, who has not won in F1 for five years.

The Spaniard shared the number eight TS050 hybrid with Swiss driver Sebastien Buemi and Japan’s Kazuki Nakajima, who had taken pole position on Thursday and drove the final stint to the chequered flag.

The tension in the Toyota garage was palpable as the clock ticked down, Alonso and Buemi linking arms with other team members and praying that there was to be no repeat of past nightmares.

In 2016, Nakajima had also been heading for victory when he slowed with five minutes remaining and came to a halt with victory falling into Porsche’s lap.

“I can’t really describe it,” said Buemi, who was also Nakajima’s team mate in 2016, when asked how it felt to win at last.

“When you look at the past, 2016 in the last lap, and Kazuki was going to be in the car for the last few laps so lots of emotions really.”

The number seven Toyota – driven by Japan’s Kamui Kobayashi to the chequered flag and shared with Briton Mike Conway and Argentina’s Jose Maria Lopez — crossed the line in one-two formation with Nakajima but two laps down.

Alonso’s hopes had appeared to dim as the race entered the early hours, with his car two minutes adrift of the sister Toyota after a stop-go penalty.

But the Spaniard put in a remarkable stint through the darkness to reduce the deficit and his team mates – both former F1 drivers – did their bit to take back control after dawn had broken over the Sarthe circuit.

Alonso, who is also a double Monaco Grand Prix winner, has made a big play about becoming only the second driver to take the ‘Triple Crown of Motorsport’ and Le Mans is the second box to be ticked.

The McLaren driver, who will remain in France for next weekend’s Grand Prix at Le Castellet, has yet to win the Indianapolis 500 – a race he led last year before an engine failure – to match the late Graham Hill’s achievement.

There has been speculation that a Le Mans win could hasten the 36-year-old’s departure from Formula One, with McLaren still a long way off the podium.

Koepka fends off Fleetwood charge to win US Open