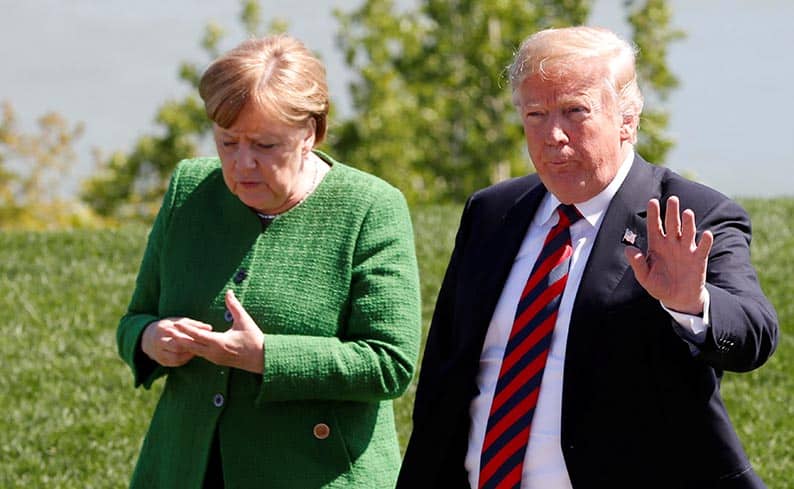 File photo: German Chancellor Angela Merkel stands next to US President Donald Trump while posing with other leaders (not pictured) for a family photo at the G7 Summit in the Charlevoix city of La Malbaie, Quebec

US President Donald Trump blamed migrants in Europe for violently changing the culture and for what he inaccurately described as a rise in crime in Germany as he sought on Monday to defend his administration’s widely criticised policy on illegal immigration.

Immigration activists, medical professionals, religious leaders, Democrats and some in Trump’s own Republican Party have condemned his administration for separating nearly 2,000 children from their parents at the US-Mexican border between mid-April and the end of May.

Administration officials have defended the tactic as necessary to secure the border and suggested it would act as a deterrent to illegal immigration – which Trump has long made a key goal of his presidency.

In the face of criticism, which on Sunday included protests at immigration detention facilities in New Jersey and Texas and a sharply worded message from former first lady Laura Bush, Trump responded with a series of Twittter messages on Monday.

“The people of Germany are turning against their leadership as migration is rocking the already tenuous Berlin coalition. Crime in Germany is way up. Big mistake made all over Europe in allowing millions of people in who have so strongly and violently changed their culture!” he tweeted.

“We don’t want what is happening with immigration in Europe to happen with us!”

In May, US Attorney General Jeff Sessions announced a “zero tolerance” policy in which all those apprehended entering the United States illegally, including those seeking asylum, would be criminally charged, which generally leads to children being separated from their parents.

Trump has previously falsely accused Democrats for creating the need for the family-separation policy. He has said their support for passage of a broader immigration bill would end the separations.

In another tweet on Monday, Trump said Democrats were “weak and ineffective with Boarder (sic) Security and Crime.”

“Tell them to start thinking about the people devastated by Crime coming from illegal immigration. Change the laws!” he said.

Trump’s tweet about Germany referred to a political dispute over immigration that is threatening German Chancellor Angela Merkel’s governing coalition.

Her open-door migrant policy is widely blamed for the rise of the right-wing AfD, now the main opposition party in Germany’s federal parliament. More than 1.6 million migrants, mostly Muslims fleeing wars in the Middle East, have arrived in Germany since 2014.

Contrary to Trump’s assertion, crime has fallen off dramatically in Germany, with the country’s internal ministry reporting last month that criminal offenses in Germany totaled 5.76 million in 2017, the lowest number since 1992, leading to the lowest crime rate for the country in more than 30 years.

Laura Bush, married to the last Republican president before Trump, took the highly unusual step of publishing a Father’s Day op-ed in the Washington Post on Sunday, in which she said “this zero-tolerance policy is cruel. It is immoral. And it breaks my heart.”