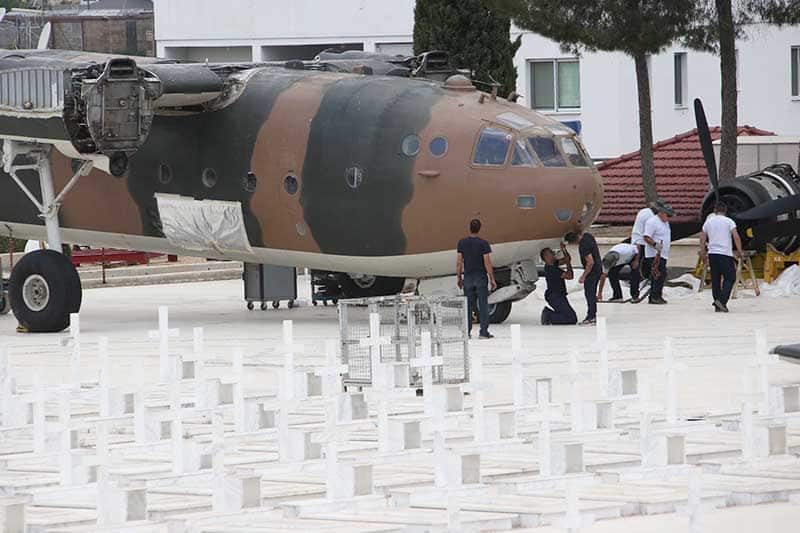 The noratlas plane at the cemetery on Tuesday (Christos Theodorides)

Military equipment and other findings located at the Makedonitissa military cemetery in Nicosia during excavations to unearth the remains of an aircraft carrying Greek commandos that was shot down in July 1974 were delivered on Tuesday to the National Guard to be donated to museums.

In a ceremony at the anthropology lab of the Republic of Cyprus in Engomi, in the presence of Humanitarian Affairs Commissioner Photis Photiou, the equipment and personal items of the commandos that died when the plane crashed were delivered to the National Guard. Present was the force’s deputy commander Costas Chrysilios.

The findings will be donated to museums in Greece but also the museums of the National Guard and of the Greek military force in Cyprus Eldyk.

Photiou said the delivery of these items was “a historic moment” because it concludes the procedure of the recent excavations at the Makedonitissa mound to locate the Noratlas type aircraft that had been shot down in 1974.

The soldiers, part of a Greek commando battalion sent to Cyprus in July 1974, had been buried along with their transport aircraft, which was shot down by friendly fire while trying to land at Nicosia airport.

The aircraft carried 28 commandos and four crew. Only one commando survived after he jumped out of the flaming transport plane before it crashed. Others killed that night were buried elsewhere.

The burial site later became a military cemetery and the mound under which the Noratlas was buried, hosting a monument to the fallen.

The items ought to be utilised properly “because both these findings and the Noratlas aircraft that was transported from Greece yesterday to be set up at the Makedonitissa cemetery must bring to mind those heroes that came to Cyprus to offer the most valuable thing, their lives, for the freedom of this country,” Photiou said.

He added that the aircraft and the findings ought to remind younger generations that in 1974 “during that unequal and betrayed struggle there were heroes, […] there were people who came from Greece because they truly wanted to help this country.”

Assistant of the Greek Cypriot member of the Committee on Missing Persons Xenophon Kallis said the items located at the burial site of the Noratlas are not in a good condition due to humidity, as grass had been planted at the cemetery where they had been buried. He also said that a great number of explosives had been located, which were picked up by the National Guard, which had assisted in the excavation.

“We had also located other personal items, such as crosses and talismans which we delivered to the families of the commandos,” he said, adding that some of the other findings could be preserved for historical purposes.

On Monday a Noratlas transport plane arrived in Cyprus from Greece and was taken to the Makedonitissa military cemetery to be used as a monument for the Greek soldiers killed during the 1974 Turkish invasion.

The aircraft arrived by ship, disassembled, and was transported by lorries to the cemetery in the Makedonitissa area. It will be reassembled by Greek air force officers.

The Noratlas is the same type of aircraft used in July 1974 to fly Greek commandos to Cyprus to help the National Guard fight the invading Turkish army.

Thirteen – out of 15 – aircraft reached Cyprus, setting off from Crete, but several of the planes, mistaken for a Turkish airborne assault, took fire from National Guard anti-aircraft batteries positioned around the Nicosia airport.

One of those planes was later buried, along with the remains of commandos still inside, under a mound at Makedonitissa cemetery with a monument erected to those fallen in 1974 on top.

Only recently it was exhumed to identify the remains of around 19 soldiers who were missing and hand them over to their families.

Italy wants EU border agency in Africa, not at sea

Radical change for the way justice is served