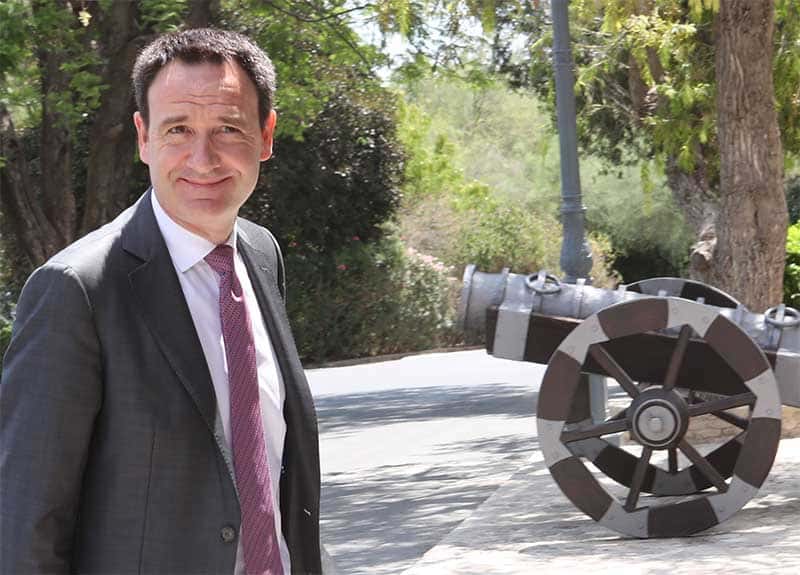 Total's Stephane Michel at the presidential palace on Tuesday

French oil and gas giant Total is interested in broadening its presence in Cyprus’ hydrocarbons space, president Nicos Anastasiades said on Tuesday after seeing a senior executive of the company.

“There is an ongoing positive consultation,” Anastasiades told reporters following a meeting at the presidential palace with Stephane Michel, head of Total’s Middle East and North Africa Exploration & Production.

Energy minister Giorgos Lakkotrypis, present at the meeting with Michel, confirmed that the French multinational is interested in expanding their activities in Cyprus’ Exclusive Economic Zone (EEZ).

Asked whether Total wanted to buy into licensed acreages other than block 8, he said: “There is an interest broadly speaking, there are various ways in which the company wants to expand.

“This development absolutely satisfies us.”

Total recently applied to acquire a 50 per cent stake in block 8, licensed to ENI.

Total is currently co-licensee with ENI in blocks 6 and 11.

Lakkotrypis said Total’s application for buying into block 8 was being reviewed by an advisory committee.

The committee is seeking “some formal clarifications,” he added, after which the matter would go before the cabinet for a final decision.

There was speculation that Total is also keen on taking a share of block 3, licensed to a consortium of ENI and Kogas.

In February, a drillship commissioned by ENI was prevented from reaching its target in block 3 when Turkish warships – on the pretext of conducting drills in international waters – blocked its path. The drillship eventually withdrew after a two-week standoff at sea.

The Italian government’s response to the incident – the Italian state has a stake in ENI – was seen as timid. There were suggestions at the time that the Italians may have been swayed by Turkish Cypriot officials not to raise the stakes.

Ankara supports the north’s claims on block 3, as well as on blocks 1, 2, 8, 9, 12 and 13, including within few kilometres of the Aphrodite gas field.

According to Lakkotrypis, he and Anastasiades also discussed with Total’s Michel the recent discovery of gas in block 6.

He said that over the coming days geologists from Total and the Cypriot government would jointly be reviewing the data, in a bid to finalise the amount of gas at the site dubbed Calypso.

The minister demurred on a question as to how the French company envisages developing and monetising the Calypso find as first the amount of gas needed to be determined.

“But from talks we have had with the company in the past, they indicated that they are ready to go forward with the necessary investments in order that present or future discoveries may be optimally utilised.”