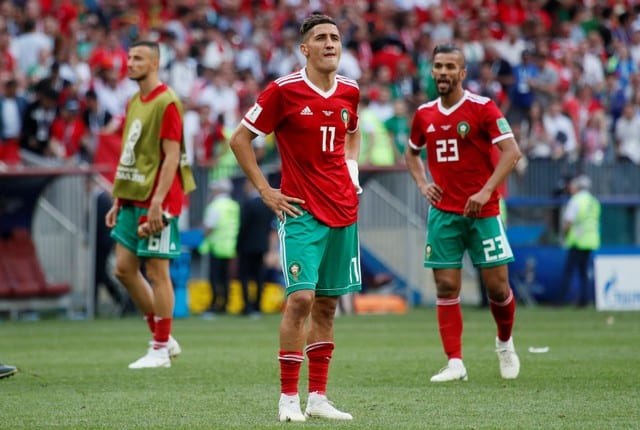 Morocco coach Herve Renard was overcome with pride at his team’s performance and angry at the way Portugal’s Cristiano Ronaldo was able to grab the solitary goal that will send the North Africans home early from the World Cup.

The Frenchman refused to blame American referee Mark Geiger after the 1-0 defeat in Group B. However, he complained that his side should have had a free-kick for the way Portuguese defender Pepe crashed into Khalid Boutaib, who was guarding the front post for the corner that led to Ronaldo’s fourth minute header.

His voice breaking with emotion after the defeat, their second following a stoppage-time loss to Iran, Renard insisted the nation could be proud of their team but that they had failed to take their chances.

“We deserved to win. We had five or six chances in the second half.”

Thanking the travelling fans who turned Moscow’s Luzhniki Stadium into “more like Casablanca”, he lamented that his side could not deliver an adequate reward for the supporters.

“What I am sure of at this moment is that the entire Moroccan people is proud of this team,” he said.

“Of course it’s easier to play with a player who has one chance and he puts it away. But we are in Morocco.

“We have quality players. Despite the ups and downs of the game, we should have been more effective. Because, like in the first game, we had plenty of chances. I won’t blame anyone. That’s football. It’s always those who know how to be present in the box, the most gifted players, who make the difference.

“We took a lot of risks and we didn’t get our reward.”

Singling out veteran forward Nordin Amrabat for praise, Renard dismissed suggestions that he might have risked his health by playing after taking a knock to the head against Iran, just five days ago, and then by removing his head protection.

“He is a warrior. He wanted to play,” said Renard, adding that he removed his protector “because his spirit is amazing”.

He added that it was not his job to decide on medical issues but that team medics and Amrabat himself were responsible.

With nothing more to play for against old rivals Spain on Monday, Renard promised Morocco’s fans something to cheer for.

“We will end the adventure against Spain, trying to put on the same performance as today and to go down with honour,” he said.