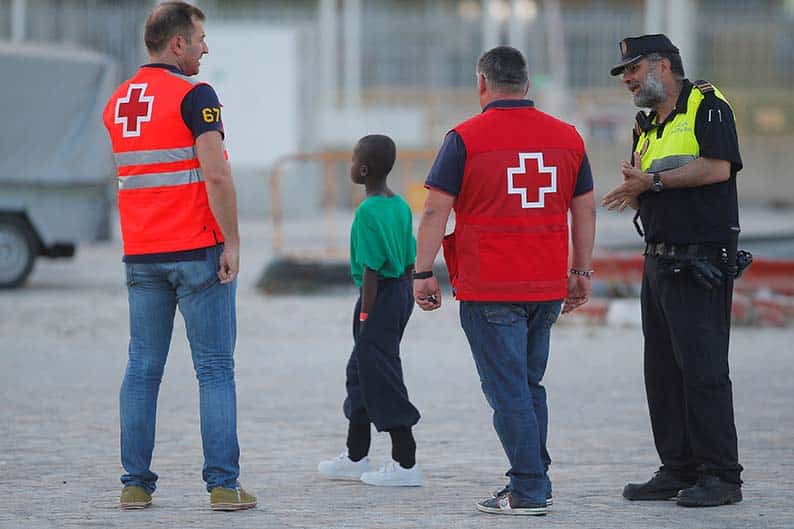 A migrant child, part of a group intercepted aboard three dinghies off the coast in the Mediterranean Sea, is helped by members of Spanish Red Cross after arriving on a rescue boat at the port of Malaga, Spain

Denmark and Norway are working on establishing a centre in Kabul where unaccompanied Afghan minors who have been denied asylum can be sent back, the Danish and Norwegian governments said on Wednesday.

Asylum and immigration have been controversial political topics in the Nordics, as in other Western countries.

The European Union is discussing setting up centres outside of its borders for denied asylum seekers in regions such as Northern Africa.

In the United States, the Trump administration is facing a growing outcry over its practice of separating migrant children from their parents at the US-Mexico border.

If the Danish-Norwegian plan goes ahead, unaccompanied Afghan minors who have been denied asylum would be forced to return to a centre in Afghanistan’s capital.

“We don’t have a deal yet, but we have a good dialogue (with Afghan authorities),” Norwegian deputy justice minister Torkil Aamland told Reuters.

“We want to set up a safe, good centre with real educational opportunities in line with U.N. children’s rights,” he said, adding that 16-, 17- and 18-year-olds would be returned to Afghanistan under the plan, but not those 15 years and younger.

The Danish immigration ministry declined to further comment aside from confirming the news, which was first reported by Denmark’s Politiken and Norway’s Aftenposten newspapers.

A diplomatic source told Politiken that it would be difficult to send back unaccompanied minors.

“For an adult it can be extremely difficult to be sent back to Kabul. For a child without a social network it is immense,” the diplomat was quoted as saying.

The United Nations Children’s Fund Unicef said minors should not be returned to Afghanistan currently.

“The security situation has significantly worsened over the past year-and-a-half. It is not safe to return children to Afghanistan,” Ivar Stokkereit, manager of child rights governance at Unicef Norway, told Reuters.

Afghanistan’s Western-backed government is fighting an intensifying war with both the Taliban and the Islamic State that has turned much of Kabul into a high security zone of concrete blast walls and razor wire.

If they were to be sent back, authorities must ensure children’s rights are protected, including for care, education, health and protection, said Unicef’s Stokkereit.

“It should also be family-based reception centres, not institutions,” Stokkereit added.