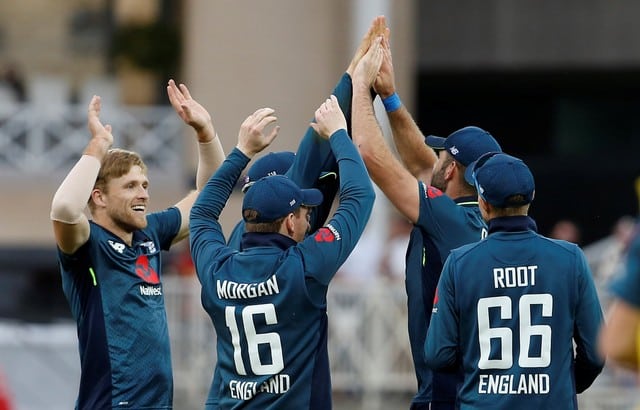 England stormed to a one-day international world record of 481 for six as they thrashed Australia by 242 runs at Trent Bridge to take an unassailable 3-0 lead in the five-match series.

Australia skipper Tim Paine elected to bowl first and was soon regretting that decision as the home batsmen ran riot against his inexperienced attack.

Jonny Bairstow plundered a magnificent 139 off 92 balls while Alex Hales smashed 147 from 92.

Skipper Eoin Morgan tucked into the scoring feast with a 21-ball half century — the fastest by an England batsman in ODIs — to become his country’s leading one-day scorer.

Australia were never in the hunt once opener D’Arcy Short chipped a catch to Moeen Ali off the bowling of David Willey in the fourth over and Moeen removed Travis Head and Shaun Marsh.

Adil Rashid ended with four wickets as Australia were bowled out in 37 overs for 239 — handing England their biggest ever winning margin in ODIs and Australia’s heaviest defeat.

It was a remarkable day of shot-making by England’s batsmen though as they carved an ODI record 62 boundaries, including 21 sixes. The only disappointment was that they failed to go beyond the 500-run barrier after some late wickets fell.

Remarkably England failed to strike a boundary in the last four overs — although the damage to the Australian morale was already done.

Australia skipper Tim Paine described England’s batting as some of the “best striking I’ve ever seen.”

“They are red hot at the moment,” he said. “That is as hard a day’s cricket as I’ve had in 16 or 17 years. Today it was a learning experience.

“Wherever we put the field they hit the gaps. They are the yardstick of 50-over cricket right now.”

England got off to a flying start with Jason Roy and Bairstow offering a sign of what was to come.

Bairstow struck three fours off quickie Jhye Richardson’s first over and Roy tucked into Billy Stanlake, pulling him for a six as England reached 38-0 after five overs.

Bairstow was dropped on 30 by Marcus Stoinis and that proved extremely costly as he began to pepper the boundary.

When Roy was run out for 82 it brought Hales to the crease and he set about the Australian attack with relish, striking 16 fours and five sixes in a sizzling knock.

It seemed inevitable England would reach 500 but Hales and Morgan went in successive balls late on as Richardson got some belated reward and the run rate finally dropped.

Morgan, who will lead England into a home World Cup next year, said it was a complete display.

“There were some outstanding performances and we were relentless both with the bat and the ball,” he said.

“It’s certainly a day to be proud. The top three are a huge asset to have. There are two games to go and still opportunities for them to score big runs so hopefully they will continue to be as hungry as they were today.”