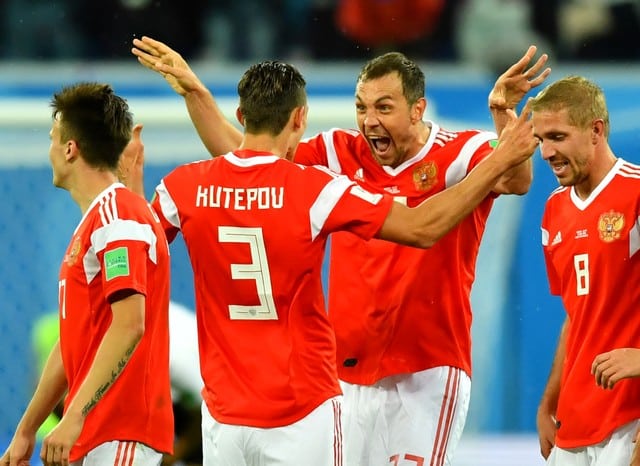 Written off before the start of the tournament, hosts Russia have scored eight goals in their opening two games to reach the knockout stage with a match to spare

With the host team through to the knockout stages for the first time since the collapse of the Soviet Union, Russia’s World Cup is going better than even Vladimir Putin expected.

Increasingly isolated on the global stage, the World Cup has so far helped Putin send a defiant message to his opponents that Russia is succeeding despite Western efforts to hold it back.

Calls for a boycott by some Western politicians failed to gain traction, all Moscow’s organisation and infrastructure commitments have been met, and Russia’s 11 host cities have been flooded with international fans drinking, singing and dancing in the streets.

For Putin, Russia’s runaway success on the pitch has been the icing on the cake.

Russia thrashed Saudi Arabia 5-0 in their opening match and secured a surprise 3-1 win over Egypt in St Petersburg on Tuesday. On Wednesday, Uruguay’s victory over Saudi Arabia meant Russia is guaranteed to qualify for the second round.

“I think this success is very important, and all the more so because no one really expected it,” said Maxim Trudolyubov, senior fellow at the Kennan Institute and editor-at-large of Russian daily Vedomosti.

“Putin is the kind of politician who wants victories,” he said. “For Putin, politics is a fight, a game, a gamble, a victory … and about showing everyone that Russia means something in the world.”

Russia entered the World Cup ranked by FIFA as the tournament’s weakest team and without a win on the field in more than seven months.

So low were expectations, that a satirical song mocking the national side and questioning the financial sense of hosting the event went viral online, garnering more than 9 million views on YouTube. “Our team is, let’s be frank, shit,” sings Russian comic Semyon Slepakov in the song.

Even Putin seemed resigned to focusing his attention on victories away from the pitch, quipping that “the winners will be the organisers” when asked at an economic forum last month who would win the World Cup.

Since then, the Russian leader, who is a keen sportsman although not a footballer, was seen laughing and joking with FIFA head Gianni Infantino and Saudi Crown Prince Mohammed bin Salman as Russia cruised to their big win in the tournament’s opening match.

Kremlin spokesman Dmitry Peskov said Putin had not been able to watch Russia’s performance against Egypt as he was on a plane back from a trip to Belarus, but he was told about the result by his staff as soon as he landed.

“He reacted just like our entire country, very positively,” Peskov told a conference call with reporters. “It is a very sweet victory for everyone, very heartening, and so the president was also happy.”

Some Kremlin-watchers, however, believe any political dividends Putin receives from Russia’s success at the tournament will be limited.

Andrei Kolesnikov, a senior fellow at the Carnegie Moscow Centre think-tank, said the World Cup was unlikely to generate the type of nationalist fever Putin has previously used to boost his popularity, such as after Russia’s annexation of Crimea from Ukraine in 2014.

“Nobody expected anything from our national football team,” he said. “So there is no reason for any patriotic hysteria.”

“The best Putin can do in terms of soft power is to organise the championship well without any unpleasant episodes, especially in terms of security, and just enjoy the sport. I don’t think that all that stuff means anything domestically.”

And while the tournament has helped the Kremlin distract from some things it would rather go unnoticed – such as an unpopular decision to hike taxes and increase the pension age at home, or Moscow’s seemingly diminished role in the North Korean crisis – that may not ultimately be enough.

A 32-year-old England fan from London told Reuters the well-organised and welcoming tournament would not help rehabilitate Moscow’s imagine in Britain, where the Kremlin is accused of poisoning a former Russian spy in a nerve-agent attack earlier this year. Moscow denies involvement.

“They’re going to want to try and improve the image of Russia by hosting this tournament, and so they’ll make it as welcoming for the fans as ever,” he said while visiting Moscow’s Red Square on Wednesday.

“But…that’s got nothing to do with international relations, like invading Crimea and poisoning people in Britain,” he said. “It’s a PR exercise, the whole World Cup. It doesn’t change, for me it doesn’t change that at all.”