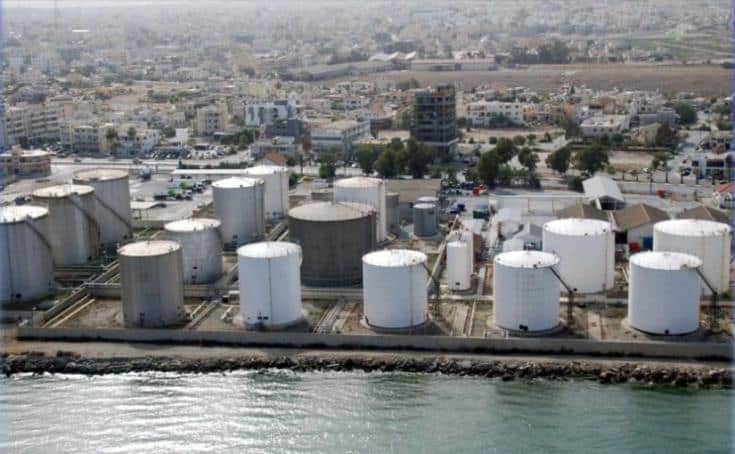 Energy Minister Giorgos Lakkotrypis said on Wednesday he had submitted a signed memorandum of understanding (MoU) to the cabinet between the government and six private companies for the removal of the fuel storage facilities at Larnaca to Vasiliko in the Limassol district.

Lakkotrypis said that even though the municipalities from the areas in question were not party to the MoU he submitted “for their own reasons”, the plan would go ahead and a timetable had been fixed with a deadline of December 31, 2019 for moving the liquid fuels, and the creation of LPG facilities by December 31, 2020.

Larnaca municipality last month rejected a third draft of the MoU on the relocation of the oil and gas firms from the district by 2020 and was no longer willing to engage in further discussions as long as there was no progress.

“This is the first time that certain companies are bound by their signature on a specific timetable,” he told reporters. He said he informed the mayors.

Asked if there were any incentives given to companies he said: “The incentive is obvious. If you see the tourist map of Cyprus, an area which lends itself to further development of the industry is Larnaca bay which is at the heart of these [fuel] facilities. It is therefore in the interest of those companies holding tracts of land there to relocate and exploit the area for tourism, which both the government and the city of Larnaca wanted, and to this end the ministry of the interior is proceeding already to undertake the necessary planning for the region.”

As regard penalties for the companies if they failed to meet the deadline, Lakkotrypis said a steering committee was being set up, which he would chair every three months to see the progress on the work “whether this will be related either to the government side or the companies” and take steps from there.

One of the previous drafts included the possibility of fines and the termination of a company’s operations for those that don’t comply. Lakkotrypis said at the time it also provided for fines up to €17,000 and legal procedures to strip companies of their licence if they do not stick to timeframes.

Larnaca Mayor Andreas Vyras last month rejected the third draft of the MoU over a clause giving the right to any signatory to opt out of the deal if they wished to, by giving a month’s written notice.

Vyras said the legal services did not give their stamp of approval to the second draft of the MoU and had asked for amendments, leading to a third document, which according to the mayor, defeated the purpose as the aim was to make sure all timeframes given were met by the oil and gas companies.

He had asked for a number of safeguards to be included in the memorandum to make it clear that those who do not apply what they have to do within timeframes, be subject to sanctions.

Also last month President Nicos Anastasiades attended a ceremony to start the demolition of fuel company Petrolina’s tank 15, and said it marked the beginning of the timeframe provided for in the MoU.

In the meantime, it had been announced that the government will next month launch a tender for the purchase of an FSRU (floating, storage and re-gasification unit) and for related infrastructures at Vasiliko a project allowing the island to import liquefied natural gas and use it for electricity generation for the first time.

Escape to world of dance