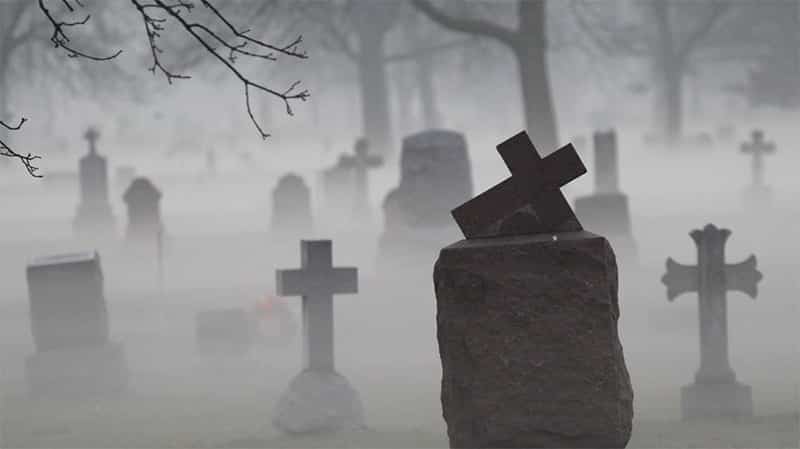 Cassandra and I were enjoying a glass of iced lemon tea in her cool solarium. Outside the window her garden was beautiful but the scene outside was at odds with her expression; she had something on her mind, so I allowed her the time she needed. She began,

‘You remember when we were talking about being buried and so on?’ I did.

‘I said I didn’t want to be buried, if you remember?’ I did.

‘Lots of people feel that way, Cassandra, me included. It’s a natural fear.’

‘There’s a bit more to it than that. I was told a story some years ago by a woman from a village where a strange thing happened.’

Being Irish and having lived a long time in Cyprus, I was not a foreigner to strange things.

It seems that there was a young couple in a village, she couldn’t remember details just the gist of the tale, very much in love and about to get married. Easter was approaching and the girl had been given a lovely gold chain to wear around her neck. Her mother’s kitchen was busy and happy preparing for both celebrations. The girl felt peckish and took an egg to eat, despite warnings that they were still too hot. As she tried to swallow, a piece of egg stuck in her throat and choked her. She fell senseless to the floor.

‘You can picture the misery, the grief?’ Cassandra said. ‘She was pronounced dead and instead of a joyous wedding, a fast afternoon burial ahead of the impending religious feast was arranged by the stricken family and fiancé. They were inconsolable.’

‘Do you remember those guys who used to sell little bouquets in restaurants for men to buy for their ladies?’

I did and I knew where she was going. Some of these tricksters went to cemeteries after a funeral and stole flowers from recent burials, repackaged them into little bunches and sold them to unsuspecting customers who had no idea where the blooms their beloveds were sniffing had come from.

‘Well, it seems there were worse thieves back then that watched for burials and when darkness fell they would dig up the poor souls and steal any valuables they had on them. Some people, like those related to this young girl, wanted their dear ones buried with tokens of affection from life, and in this case the gold necklace had been left around her throat.’

‘Under the cover of darkness the criminals came to see if there were pickings on the corpse. One saw the chain and greedily pulled on it hard jerking the girl’s head upwards. As it came away, so did the piece of egg that had stuck in her throat. She sat up, confused and frightened but not half as frightened as the thieves who raced off screaming like the devil was at their heels.

‘Of course, the commotion woke people up and you can imagine the joy of her family and loved one when they found she wasn’t dead at all.’ Cassandra sighed.

‘But that’s an amazing and lucky end to a terrible incident.’ I smiled.

‘Yes,’ she agreed, ‘but what if the thieves had not gone there in the night? What if the poor soul had regained consciousness to find herself in that awful situation?’ She shuddered.

‘Don’t worry,’ I laughed, ‘if you go before me I’ll come and give you a good shake to make sure. You can do the same for me.’

I was passing on the story to the coffee club bunch on Sunday morning. I said if I had the money, I would opt for Switzerland and euthanasia.

Susie was stunned, her eyes brimmed and her lips trembled as she stood up to leave.

‘Well, I know what we’ll do with you when they box you, put a stake through that miserable bloody heart of yours.’ And she stormed off before we could react.

‘Shame on you, Antoni, what have you got against the poor woman?’ I asked him.

‘She dresses like a tart. Her skirts are always half way up her legs and her chest hangs out of everything she wears.’ He had his defensive face on.

‘When she was young,’ Stavroulla told him, ‘her husband made her wear dowdy clothes so men wouldn’t find her attractive. Now she’s enjoying the kind of clothes she couldn’t wear when she was young.’

‘Well, she’s not young, is she? Women should know when to cover up.’

‘And some men should know when to shut up.’ Haris snapped. Evangelos agreed.

‘I think you need to apologise Antoni.’

As we walked home Stavroulla said, ‘I can’t understand why she didn’t say something more?’

I was thinking that the emotional response proved something I had suspected: Susie had inexplicably developed a pash on Antonis. It worried me because it was following a predictable pattern. Antonis is not physically abusive, but his manner is rough and unrefined. I feared she would make the same mistake again, choosing a man that could not appreciate her and drag her down psychologically. I asked Stavroulla,

‘Do you know anyone who does proxenia?’

‘Are you looking for a matchmaker?’ She chuckled.

Plant of the Week: Root of sweet has host of uses

Tatar will reopen ‘every square metre’ of Varosha