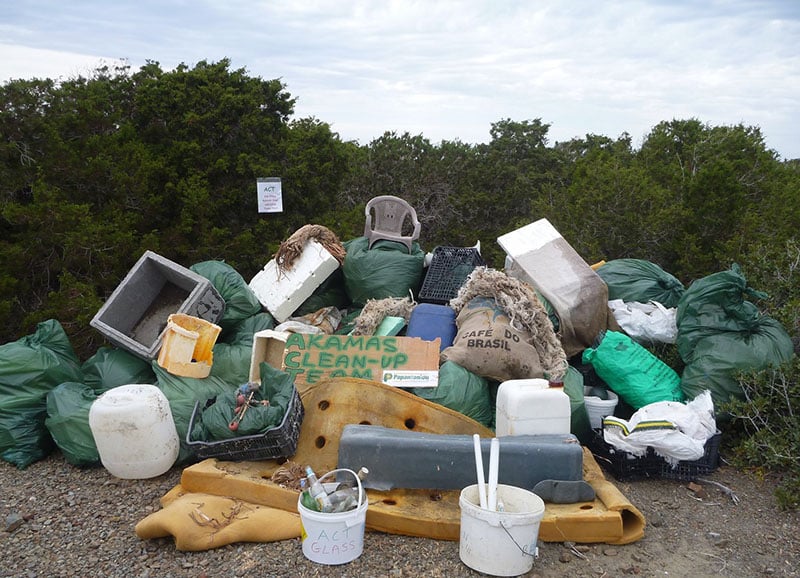 Six years after a British expat couple formed a volunteer beach clean-up team to remove rubbish from remote areas of the Akamas Peninsula they have cleared away more than 10,000kg of it.

“We are now seeing more Cypriots, especially the younger generation joining us, which is great. They are becoming more aware and the media has played a part in that by highlighting extreme conditions to raise awareness of plastic in the sea,” said Neo Chorio resident Keith Watkins, who along with wife Wendy, founded the Akamas Clean-up Team (ACT), in 2012.

The group completed their 34th clean-up on Saturday and will now take a break before starting again in October.

Each event attracts from 10 to 50 volunteers and Watkins is now looking for more people to sign up.

At the last event 16 volunteers, some from Nicosia, turned up to help clean-up an area north of Yeronisos Point and worked hard to collect 44 large bags of rubbish as well as a massive quantity of other odd items from 1,330, of coastline.

“Much of the lighter rubbish – especially plastic bottles and polystyrene pieces – had been blown back into the thorny scrub and it was a challenge to remove it,” Watkins said.

He said that some people question the point of picking up the rubbish as there will be another load brought in on the next tide, but he said efforts must be made to try and keep the island clean, adding that and there would only be more rubbish next time.

“We are the end of the problem, the solution is elsewhere, such as recycling and looking for alternative materials that are organic and will break down easily and not harm the environment.”

Watkins said this part of the coastline is prone to rubbish deposits from the sea due to prevailing currents, tides, winds and storms, but some of the rubbish had also been left by visitors to the area.

He added that after the clean-up finished, that this section of coast was virtually pristine.

“We are now taking our summer break for a few months and I hope that we have even more volunteers at the 35th ACT clean-up in October.”

For further information or to volunteer: www.facebook.com/AkamasCleanupTeam, [email protected]

Collateral damage: socialising the losses and privatising the gains

Our View: ‘Banking with human face’ brought down Co-op, not government

Coronavirus: Greece to be officially briefed on move to Category B