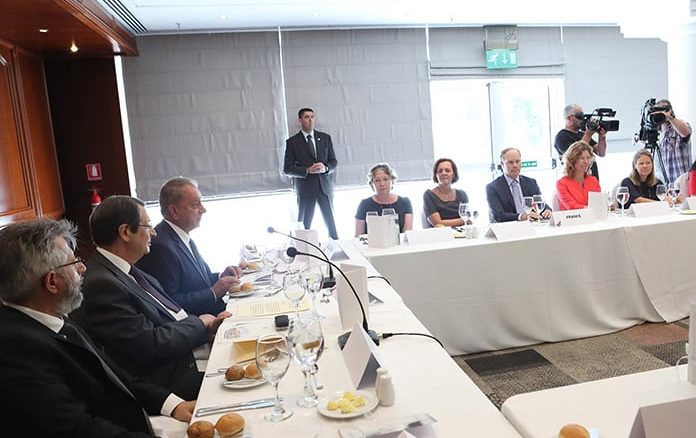 Turkey must allow Cypriots to negotiate and reach a settlement for themselves so they can live in peace and security, President Nicos Anastasiades said on Thursday.

Speaking at the luncheon hosted by the Bulgarian ambassador in Nicosia, Hristo Georgiev, Anastasiades congratulated Bulgaria for a successful, results-oriented presidency.

Referring to the Cyprus problem, he said that he remained “strongly and truly committed to negotiate a solution within the six-point framework that the Secretary-General has set as a basis for discussions, the relevant UN resolutions and the EU values and principles”.

“I am ready and confident for the resumption of negotiations in good faith and spirit,” he said.

He also expressed hope that the pending arrival of a UN special envoy would soon take place in order to assess through consultations with all relevant parties, if the necessary conditions for the resumption of the process were in place. “Hence, it is of utmost importance that all sides refrain from any further actions which will negatively affect the prospect of resuming negotiations.”

Addressing the EU Ambassadors attending the luncheon, Anastasiades said: “You are representing our closest partners in Europe and I consider you as valuable friends with a mission of positively contributing to the efforts for reunification.”

He added that the status quo, partitionist or non-functional solutions, are not acceptable “not only because they are not fair but more importantly because they will add to, instead of solving, the problem.”

He also said that Turkey must allow Cypriots to negotiate and reach a settlement for Cyprus to be able to continue reunited in the path of prosperity, in peace and security.

“Geography is destiny, and our destiny includes Turkey as a neighbour and as a country which invaded and by force has taken more than one third of our territory. The consequences of this situation dramatically affect both Greek and Turkish Cypriots and seriously limit the prospects of this island.

Therefore, reunification is not a choice. It is the one-way road that will lead us to prosperity since it will unwrap the full potentials of our island,” he said.

Later in the day, Baris Burcu, the spokesman for Turkish Cypriot leader Mustafa Akinci said that the Turkish side expects the contacts of the UN envoy “at the right time.”

In a written statement, Burcu, commenting on the UN Secretary-General’s preliminary draft report to UN members, said that Antonio Guterres pointed out the importance of developing relations between the two communities, achieving a climate of trust and cooperation, the exploitation of natural wealth for the benefit of the two communities and the achievement of a comprehensive solution.

Burcu described as an “injustice” that “in his attempt to appear balanced” Guterres did not report that “during this period the Turkish Cypriot side had a positive attitude, while the Greek Cypriot side, a negative one.”

He gave as an example, the issue of mobile telephony that was among the confidence building measures agreed by the two leaders, but, unfortunately, he said, mobile interoperability in both areas could not be achieved due to the negative attitude of the Greek Cypriot side. “This reality has unfortunately not been highlighted again,” he said.

Burcu also referred to Guterres’ mention in his report on natural resources.

“As Mr Guterres clarified in the report, the issue of hydrocarbons will be in the federal powers if a solution is reached, and that competence will have the active (effective) involvement of both communities.”

Moreover, he says, Guterres proposes a peaceful resolution of differences on this matter.

“It is once again confirmed what we have repeatedly underlined, that the framework that included his views on six issues and was given to the sides in Crans Montana is dated June 30, 2017,” Burcu said.

Kammenos: Cyprus and Greece jointly building the future of the region