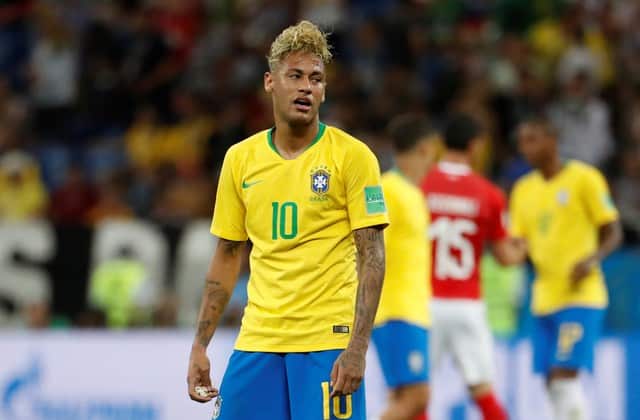 Brazil take on Costa Rica on Friday needing a win to avoid equaling their worst ever World Cup run, but the focus of their concern is once again not on the team but on one individual – Neymar.

The Paris St Germain player loves the limelight but the attention ahead of Friday’s game in St Petersburg has come for all the wrong reasons.

Neymar was criticised for his performance in Brazil’s 1-1 draw with Switzerland in their opener last weekend.

He was hunted down mercilessly by the Swiss, drawing 10 of Brazil’s 19 fouls, as many as some entire teams.

But he was also below par and showed little sign of the form that made him the world’s most expensive footballer when Paris St Germain signed him from Barcelona last August.

Worse, many fans thought he was playing for himself rather than his country.

“Whenever the ball came to him he slowed the game down, irrespective of whether it was the right thing to do or not,” former France defender Marcel Desailly wrote in The Guardian.

“Because he knows he has the talent to change games, you get the impression Neymar wants to be the one to do that something special. But he has to understand that it’s not like that at international level. He might be the greatest player, but you have to think of the collective.”

Neymar limped out of Tuesday’s training session with a sore ankle, but he is expected to be fit for what could be Brazil’s fourth World Cup match without a win, an unwanted streak that would equal their poorest such run ever, recorded in 1974-1978.

Their opponents in St Petersburg are also desperate for points after they lost their opener to Serbia.

Quarter-finalists four years ago, Costa Rica have lost seven of their last nine matches and scored only five goals in the process.
That form suggests the five-times world champions should secure the points.

Brazil, though, are not taking anything for granted – with or without Neymar’s undeniable brilliance.

“It is going to be a difficult game as are all games in the World Cup,” said Philippe Coutinho. “They are a good team. We saw the game against Serbia, and it was only decided through a dead ball situation.”

“This is another opportunity for us. We need to do it, we are all focused. We are mentally strong to play a great game.”