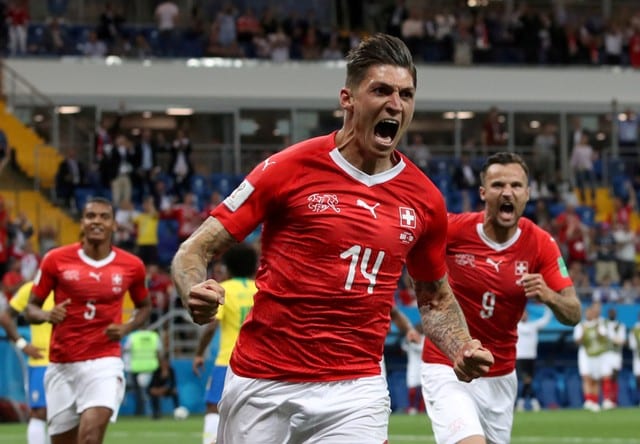 A topsy-turvy Group E could be thrown into further disorder when Serbia and Switzerland clash on Friday in a contest that could put one team on the brink of advancing to the knockout round.

A group that was supposed to see mighty Brazil at the top instead has Serbia, the lowest ranked in the pack, looking down at everyone after a 1-0 win over Costa Rica in their opener while the South Americans and Switzerland battled to a 1-1 draw.

At number six in the FIFA world rankings it is hard to call the industrious Swiss a surprise package but the stalemate with the five-time world champions still registered as a shock which shook up the group and indeed the World Cup.

The stakes, however, get higher in Game Two with Serbia able to put something of a stranglehold on a knockout spot with a second consecutive victory while the Swiss can add to their dark horse status by following up with another positive result.

Delivering a suitable encore, however, has at times eluded Switzerland who eight years ago in South Africa beat eventual champions Spain in their World Cup opener but failed to advance out of the group stage.

The Swiss are not seen as contenders for the trophy but the Alpine nation are unbeaten in their last six matches, including draws with two of the heavy favourites — Brazil and Spain.

“I hope that people will take notice of us and take us seriously, sometimes there’s a lack of recognition and that’s a pity because we played very well,” said Switzerland coach Vladimir Petkovic.

The Swiss, as usual, are well organised and physical but will not intimidate the Serbs, who showed against Costa Rica that they too embrace the tough going.

That could mean plenty of cards being flashed by the referee in a rough and tumble affair at Kaliningrad Stadium.

While the Serbs have an attacking reputation both teams each scored just once in the opening matches, both from set pieces.

Switzerland’s Steven Zuber rose high to head home from a corner to earn the draw against Brazil, while Aleksandar Kolarov curled home a superb free kick for Serbia’s winner.

“With respect to Switzerland we have analysed all three opponents,” said Serbia coach Mladen Krstajic, after his first competitive game in charge.

“We know everything about Switzerland now we are going to watch for some details (from) when they played Brazil to make sure we have not missed any details.”

Hamilton fastest as Ericsson has fiery crash in France