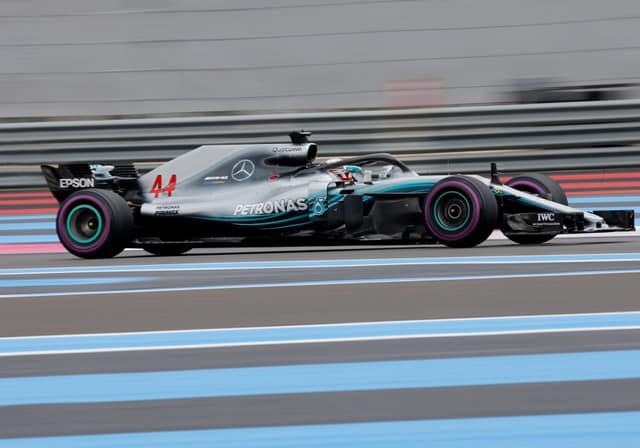 Formula One world champion Lewis Hamilton roared back to form on Saturday to put his Mercedes on pole position for the first French Grand Prix in a decade.

Finnish team mate Valtteri Bottas, who had gone top moments earlier, had to settle for second — just 0.118 of a second slower — as the Silver Arrows locked out the front row in style.

Ferrari’s championship leader Sebastian Vettel, a point ahead of the Briton after seven of 21 races, qualified in third place.

Sunday’s race will be the first French Grand Prix since Magny-Cours in 2008 and the first held at the southern Le Castellet circuit since 1990.

“It feels great to be back in France. It’s such a beautiful place. I got a great response from the crowd and I’m delighted to be here for the first time,” said Hamilton, who described his final session as ‘so-so’.

The pole, in a time of one minute 30.029 seconds, was his third of the year and pushed his Formula One record to 75.

The battle of Formula One’s four-times champions has ebbed and flowed, with Vettel taking back the lead in Canada after Hamilton had to make do with an engine reaching the end of its life while rival teams had upgrades.

He finished fifth in Montreal, a favourite track, in his worst showing of the season so far.

Mercedes brought an upgraded power unit to Le Castellet and Hamilton, who has yet to win in France, has been consistently quick.

“The headline has been the new power unit, which has been a massive effort from all the team in Brixworth…and that work is starting to pay off,” said team boss Toto Wolff.

“I did push everything in the last attempt but pushed too much,” said Vettel. “But P3 I’m happy with because the car should be good in the race.”

“I don’t think we maximised the potential of the car in qualifying today. I was struggling a bit with front grip which didn’t make it easy, but we still qualified in fourth,” said Verstappen.

“It would have been nice if it had continued raining all day but unfortunately it dried up just in time for the session,” added the 20-year-old, referring to the washed out earlier practice.

“I have no words to describe how I feel right now,” Leclerc told reporters after reaching the final top 10 shootout for the first time.

Frenchman Romain Grosjean brought out red flags when he lost control and hit the tyre wall with just under eight minutes remaining of the final session.

He will still start 10th, the highest of the three home drivers.

“Our performance has usually been so-so on Saturdays, with our average position in qualifying so far this year being 13th,” said Alonso.

“That said, I have scored points in every single race I have finished, and hopefully tomorrow will be one of those Sundays.”

Brendon Hartley will start behind them for Toro Rosso due to penalties arising from a breach of the engine regulations, with the New Zealander using his fourth of the season.

Teaching staff to be leaders