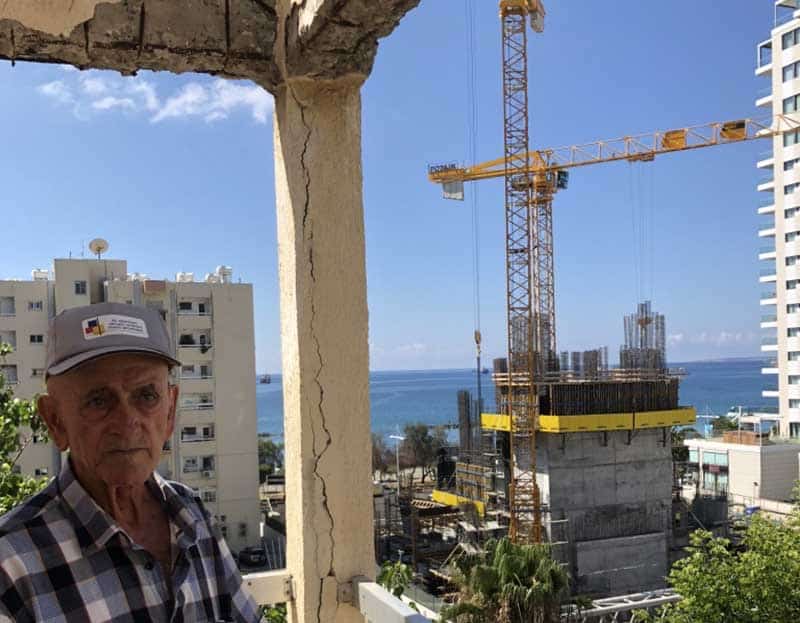 Christodoulides on the balcony of his damaged home

Eight families living in an apartment block in Limassol fear they are living on borrowed time as their building has been deemed too dangerous to live in by local authorities.

Right behind the city’s fast developing coastline where dozens of high-rise buildings are underway, the Mairoza 10 tower on Ithakis street now bears red warning signs from the municipality saying ‘keep out dangerous building’.

Inside, the old building cracks can be seen on the walls and the pillars that support its structure.
On May 30 a letter seen by the Sunday Mail told residents it was a ‘final warning’ and said the building was dangerous for those living in it and for passersby.

Residents had 15 days to evacuate but should the building collapse, the municipality bore no responsibility, it said.

Apartment owner Demetris Christodoulides told the Sunday Mail the 15 days were up but they had nowhere else to go.

“They tell me it’s too dangerous here. Alright I’ll go but to go where? I tried looking for somewhere else to rent but the prices are too expensive. We have nowhere to go.”

The same view is shared by the other tenants, he said.

The problems, according to Christodoulides began appearing about two years ago when construction for one of Limassol’s luxury high-rise buildings, the Pafilia ‘One’ – set to be the tallest residential seafront tower in Europe, according to their website, with 37 storeys – got underway.

“When they were drilling underground our whole building was vibrating, we could feel everything shaking,” Christodoulides said.

“At first, we thought it was an earthquake. Then we realised what was really going on.”

Christodoulides, who owns the apartment and lives in it with his wife and daughter, is arguing the visible cracks on the building’s columns are a result of the vibrations of the drillings related to the construction of the high-rise building just in front of their home.

“We know the building was old. We know it has problems. We’re not complaining about its deterioration. We’re talking about the very obvious cracks around the building that are putting it in danger of literally collapsing.

“The local authorities have so much money to spend on the carnival. And for us, they have nothing.”

Approached by the Sunday Mail to comment on the case, the Limassol municipality was not immediately available.

Someone close to the case from the municipality however called the idea that the damage was a result of the construction “laughable”.

In their own statement, Pafilia said they were closely monitoring construction “through specialised instrumentation and definitely no vibrations are caused or recorded from the construction of One Tower.

“Vibrations with possible consequences can be caused in the case of using heavy vibrating rollers and other machinery in infrastructure projects (roads) which is not applicable on a residential development.”

Though Christodoulides is pleading with the municipality and the developer to help them find somewhere to stay, he says he is prepared to take the case to court.

How far it will go though is a difficult to tell. The building was built after the Turkish invasion in 1974.

Residents know the rules and regulations were not strictly adhered to at the time, particularly as there was a rush to set up places for people to live.

His plight has also come to the attention of the Limassol active citizens initiative, a group of local residents who say they are against the way tall buildings appear to be cropping up everywhere without a long term plan in sight.

“We’re not against developments,” members of the group told the Sunday Mail.

“We want tall buildings, we want developments but we want it done in a way that is proper and sustainable.”

Last month Interior Minister Constantinos Petrides said in the first three months of 2018 alone, the government issued building permits for 25 high-rise buildings and 60 more are pending, most of them in Limassol.

The initiative fears that this is being done too quickly, without any long-term plan in sight and with complete disregard for Limassolians.

Already rent prices are going through the roof and finding an affordable place to stay is becoming exceedingly difficult.

“These apartments aren’t for the public good. They’re not going to help people find a place to stay,” the group said.

Instead they’re seen as expensive apartments locals can’t afford that will become ghost towers as investors make use of the citizenship-by-investment scheme, allowing foreign investors to acquire a Cypriot passport by investing €2m in assets or companies, including real estate.

“Are we all second class citizens because we haven’t bought a passport?” the groups asked.

They argue the tall buildings should be built in a dedicated area with the infrastructure to support it, ideally towards the outskirts and not on the coast.

The structure of the city should resemble an amphitheatre with taller buildings in the back and shorter ones in the front, unlike the way it looks now and is expected to look in the next few years, two members said.

Countering arguments that tall buildings block the view of the sea, the interior ministry argues that the effects are on the contrary worse when the buildings are lower and wider as opposed to taller and thinner.

Though Petrides did not wish to go into detail over the benefits skyscrapers may have, he pointed to a framework posted on his ministry’s website of “general principles and preconditions for the construction of high-rise buildings with clear documentation of the town planning method followed during the assessment of the applications”.

Residents however do not feel it accurately reflects reality as it outlines a high-rise building must be in an open space so as not to have consequences on neighbours.

The blocked view and sunlight, along with the fear of being cast in shadow makes residents feel differently.

Moreover, little thought has been given to the effect construction has on the beach, according to Greens MP Charalambos Theopemptou.

Those near the construction sites often see that as drillings go on, water from underground comes to the surface.

This water is then dumped into the sea through a pipe, Theopemptou said. Not deep into the ocean but very near the shore.

“It’s not just one tower. We’re talking about a few dozen. So we’ll have this going on for about two years as construction continues.”

Theopemptou clarified this isn’t just plain water. It has mud and thin grains of sand. As a result, the sea becomes more opaque and anything alive in the sea will die.

“Fish don’t give birth in the air,” he said.

Nonetheless, the environment department has gone ahead and given construction companies the permit to do this when other options were readily available, Theopemptou said such as dredging which had been carried out in the past for other projects at the harbour and marina area.

Additionally, a craft could have been used to dump the water further out to sea.

“They need to study the consequences first and then approve not vice versa.”

Nonetheless, the environment department told the Sunday Mail they had studied the issue extensively ensuring that dewatering “should be done at an appropriate water depth, taking into consideration the precautionary principle and reassuring the least environmental impacts to the marine environment.”

It did not specify what exactly it deemed to be appropriate.

Theopemptou said the temperature of the city would also get warmer as the heat island effect is exacerbated.

With a close eye on the beach year round, the winter swimmers’ association has seen changes. The group’s leader Ermoula Stylianidou told the Sunday Mail they have lately noticed the beach is getting more and more filthy and the sea opaque.

Though Limassol’s beaches the past few summers have been found to contain awful waste, “the situation is now out of control. People swim and walk on the beach for health benefits. Now we’re seeing the opposite. They’re getting infected.”

At the rate things are moving, no obvious end appears in sight. The initiative comprised of Limassol’s active citizens argues the true beneficiaries are the developers and legal offices benefiting from the passport scheme.

Hoteliers on the other hand are concerned according to Theopemptou that the investors will use the apartments as short-term lets on services such as Airbnb.

As one member of the initiative put it: “Everyone is looking out for their own interest and not the public good”.

The rules of the beautiful game

Our View: The Co-op show unlikely to reveal anyone to blame