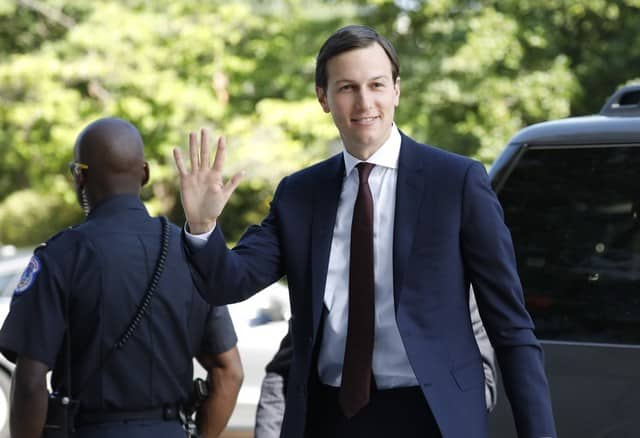 The comments underlined gaping divisions between Washington and the Palestinian leadership that have widened since Trump recognised Jerusalem as Israel’s capital in December and moved the U.S. Embassy there, overriding decades of U.S. policy.

Palestinian officials, who want East Jerusalem as the capital of a future state, accused Kushner of trying to undermine Abbas and what they described as their leader’s moderate camp.

Kushner – Trump’s son-in-law who is meeting leaders in the region, but not Abbas – told Palestinian newspaper Al Quds in an interview published in Arabic on Sunday, that he doubted whether the Palestinian president was willing or able to seal a deal.

“If President Abbas is willing to come back to the table, we are ready to engage; if he is not, we will likely air the plan publicly,” Kushner said, according to an English transcript of his words provided by Washington.

“However, I do question how much President Abbas has the ability to, or is willing to, lean into finishing a deal. He has his talking points which have not changed in the last 25 years,” he added.

Kushner appealed directly to the Palestinian people and portrayed Abbas, 82, as a leader entrenched in the past.

“There have been countless mistakes and missed opportunities over the years, and you, the Palestinian people, have paid the price,” said Kushner, who is on the trip with U.S. envoy Jason Greenblatt. “Don’t let your leadership reject a plan they haven’t even seen,” he added.

Abbas has refused to see Trump’s team since the embassy decision, accusing Washington of pro-Israel bias.

“This (U.S.) administration is really trying to destroy the Palestinian moderate camp. They want to throw us into chaos and anarchy,” said Saeb Erekat, the Palestinians’ chief negotiator.

“The road to peace is clear – commitment to the two-state solution, a Palestinian state on the 1967 borders with Jerusalem as its capital. This is the road to any negotiations or any meetings,” said Nabil Abu Rdainah, a spokesman for Abbas.

Kushner said Arab leaders had told him they wanted to see a Palestinian state, long the foundation of U.S. policy in the region. Asked if the new U.S. peace plan would accommodate that view, he reiterated that it was up to the Israeli and Palestinian “leadership and people” to determine the shape of a final agreement.

Kushner was given responsibility over Washington’s Israel-Palestinian policy, along with other top postings, after his father-in-law was inaugurated one year and five months ago.

Many commentators have questioned the credentials of Kushner and U.S. Middle East emissary Jason Greenblatt – neither had diplomatic experience.

In the interview, Kushner again refused to go into details on his peace plan. “I don’t want to speak about specifics of the deal we are working on,” Kushner said.

Netanyahu said on Sunday he and the two envoys discussed the diplomatic process and regional issues, with “particular focus on the situation in Gaza”, where economic hardship has deepened and violence has surged along the Israeli frontier.

“The question came up of how to solve the humanitarian situation in Gaza without strengthening Hamas,” Netanyahu told his cabinet in public remarks, referring to the Islamist militant group that is dominant in the enclave.

“These things are clear – one, how do we maintain security, and two, how to prevent a wider escalation – if this is at all possible,” Netanyahu said.

The U.S. plan is expected to propose solutions to core issues in dispute between the Israelis and Palestinians, such as borders, the future of Israeli settlements, the fate of Palestinian refugees and security.

Israel captured the West Bank, East Jerusalem and the Gaza Strip in the 1967 war. Israeli forces and settlers pulled out of the Gaza Strip, now controlled by Abbas’s main rival, the Islamist Hamas group, in 2005.