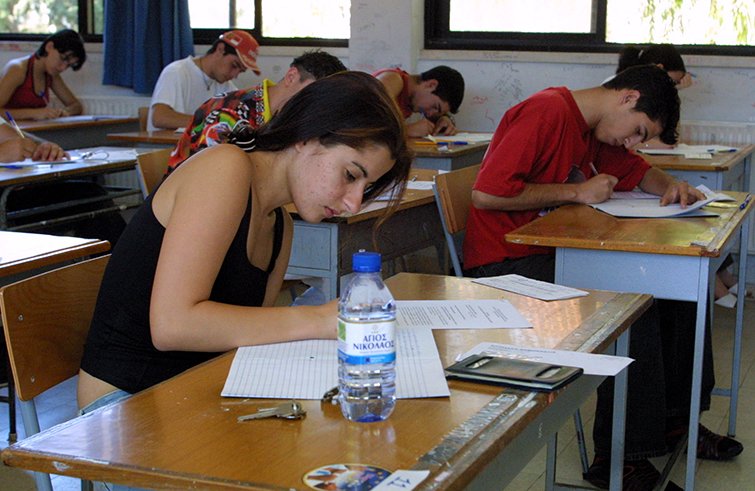 Exams results for the national exams have revealed another disappointing year with the average grades in modern Greek being 9.94 out of 20 and core maths just 8.58, the latter more than two and half points lower than last year.

Most average grades of the joint high school graduation exams and for students seeking entry to state universities in Cyprus and Greece, remain low, many of them lower than last year. The top mark is 20. In total, 7,700 pupils took the exams.

An official of the education ministry said on Monday that the low average scores are expected to improve when the new exam system is introduced. Instructions have been given for a reduction in the material taught in state schools.

Speaking to Sigmalive, head of the education ministry’s exams service, Terpsa Constantinidou, said that this improvement was not random but the result of “effective work”. A lot of emphasis had been given to the subject to prepare students for their exams, she said.

Pupils tested in advanced mathematics received an average of 8.39. Last year the average was 9.68. In core maths, the average was 8.58, more than two and half points lower than last year.

The average grade in physics was 9.5, more than two points lower than in 2017.

A slight improvement was recorded in biology, where the average was 10.19, almost a point higher than last year.

Pupils who sat the chemistry exams received on average 9.81, which is almost at the same levels as in 2017, while in computer science the average was 12.98 compared to last year’s 13.55.

The highest average grades were recorded in foreign languages with the highest – 16.65 – in German, followed by French at 14.52. The average in English, which was taken by around 3,000 candidates as it is an obligatory course, was 12.93.

Constantinou said that the ministry will analyse these results and give them to the competent departments for their own remarks, before being conveyed to the schools.

She added, that this past school year, a new system had been applied, referring to the reform in the educational system that abolished the unified education system in lyceums.

She said the exams currently serve two purposes: “There are obligatory subjects for reasons of school graduation and subjects for entry to universities.”

As of the 2019-2020 school year, Constantinidou said, there will be two different exams, one for graduation purposes, and one for entry to higher education.

“I believe that the average grades will improve as regards graduation,” Constantinidou said.

She added that the average for university entry purpose is expected to remain at the same levels. Usually, pupils focus more on their university entry exams, as there is great competition among candidates for a seat in some programme studies that are very popular such as primary education teaching, law and medical schools.

Constantinou admitted that the excessive workload of pupils “is an issue” and that the education minister has already given instructions for a reduction in the material taught.