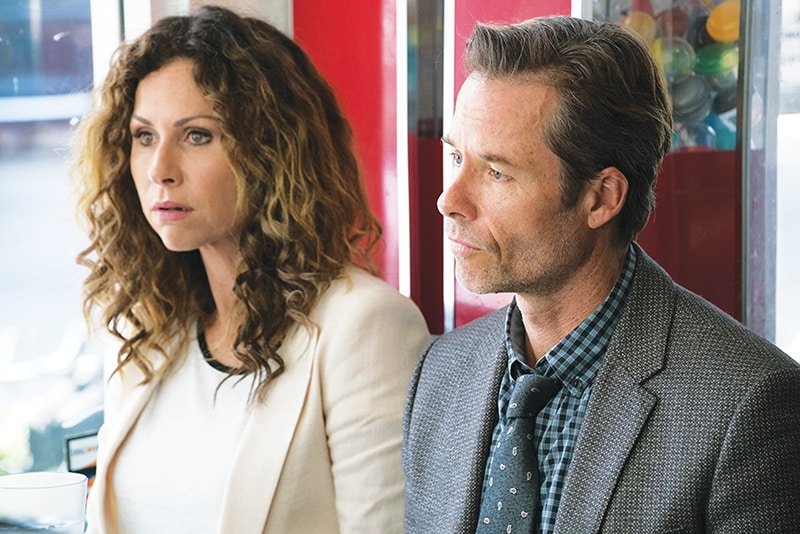 Who exactly is the spinning man? Is it related to spinning a yarn, which Evan (Guy Pearce) may be doing when he claims he had nothing to do with a high-school girl’s disappearance? Is he ‘spinning’ between truth and lies? Maybe – but the most apt reading seems to come in the final shot, when a highly symbolic mouse (which Evan and his family have been trying to catch throughout the movie) is seen running madly on its spinning wheel. This, says the film, is roughly our own human condition – running in place without getting anywhere, stymied by the slippery nature of truth and our own unreliable memories.

Sounds a bit cerebral? Spinning Man is indeed a bit cerebral, a mystery drama with pretensions and a lead actor who explicitly recalls Memento, another film about unreliable memory. Evan is a professor of philosophy (actually the ‘philosophy of language’), his métier consisting of a quest for “logical clarification”. Alas, he’s also a bit of a pervert – or is he? – having left his previous job under a cloud, not to mention a “moment of weakness” with a young student (the expressive Alexandra Shipp) the previous semester. His murky past, along with other circumstantial evidence, makes him a suspect in the eyes of Malloy (Pierce Brosnan) – a cop trying to make sense of the girl’s disappearance, meaning he too is involved in a quest for “logical clarification”.

Much of the attraction of this film has to do with its casting, a case of Pearce vs. Pierce – though both are slightly underused, especially Mr. Pearce whose talent for twisted doesn’t find much purchase in bland, unexcitable Evan. Brosnan’s post-Bond renaissance is by now a given, but his silky air of avuncular menace remains magnificent and his voice remains hugely distinctive (despite his atrocious singing in Mamma Mia!) – a voice that’s both sharp and husky, a harsh piercing texture on a bed of boomy reassurance, with a hint of a lazy drawl that recalls Jeff Bridges. Spinning Man would be much less fun without its stars, not to mention Minnie Driver as Evan’s wife Ellen – especially since the film is quite slow, with some flashy direction (brief, sudden shots of a running girl which turn out to be a dream, stuff like that) making up for a lack of plot.

Actually, that’s not quite true. It’s not that the plot is AWOL, more that it lurks (unusually) in what Evan thinks as much as what he does, and in inaction as much as action. Philosophy, as the film slyly notes, is practically a recipe for inaction: Evan quotes Zeno’s Paradox (the one that states that before an object can cover any distance it first has to cover half that distance, and so on ad infinitum), a theorem which literally makes motion impossible. He places a sign above a chair, daring students to “prove this chair exists”. He’s forever noting the ambiguous nature of language; “I wanted to talk to you,” says the cop, and our hero points out that the sentence isn’t really in the past tense (i.e. Malloy still wants to talk to him). Our minds make reality slippery, and truth impossible. ‘Is there such a thing as truth?’ asks the student, and Evan – in a line that’s so key, it gets repeated later – replies: “Only what I interpret and remember as the truth”.

Spinning Man is based on a simple dramatic tension: Is our hero a killer? The evidence builds. Strands of the missing girl’s hair are found in his car – and maybe he gave her a lift without knowing who she was, he can’t quite remember. The script keeps dropping little hints. “Everyone here is nuts,” opines a dotty-looking secretary. We’re forever making choices, says the student, and rationalising them to ourselves later. Memory, as already mentioned, is unreliable, the only truth being objective proof – a strand that hits with particular force these days (though the film is based on a book written in 2003, long before Me Too), with the world being rocked by he-said-she-said cases based entirely on memory.

I suspect I may be overselling this movie. Once in a blue moon you get a smart, tricky thriller (Memento being the obvious example) which says something deep about the human condition and also translates it into gripping cinema. Spinning Man is a much more modest affair. The film works better as a thesis than it does as a film; the characters are dull, the scenes with Evan’s family seem stilted; above all, the script tosses out a bunch of insights without really teasing out the ramifications of what it’s saying. This is basically a scrappy, over-ambitious movie that’s admirable in theory but something of a slog in practice. Still, it makes a change seeing something like this at the multiplex – a film to think about as we head back to our lives, running in place with that wheel forever spinning.