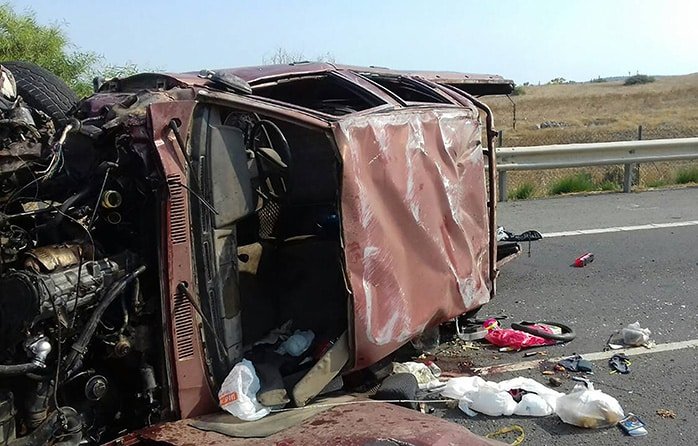 A five-year-old girl and a 38-year-old man died on Monday in two separate road accidents in Larnaca and Limassol, while a woman and a four-year-old boy, have been seriously injured.

The first accident that led to the death of 38-year-old Zacharias Evripidou occurred at around 6.40am near Palodia. The 38-year-old driver was on his way from Platres to Limassol. His two children, a boy, six, and his nine-year-old daughter were injured.

Evripidou, who was not wearing a seat belt, police said, was killed when his car overturned on the road after clipping the side mirror of another vehicle coming from the opposite direction.

He lost control of his vehicle and was thrown from the car when it flipped onto its side. He died at the scene. The two children were wearing seatbelts at the time of the accident.

They were taken to Nicosia general hospital and then to Makarios children’s hospital where they were both admitted as a precaution.

According Limassol police deputy chief, Filippos Papaelia, “the reason the two children were not seriously injured” is because they had their seat belts on.

The driver of the other car, a 34-year-old man, underwent a breathalyser test, which came up negative. He was arrested later in the day. A police spokesman said a preliminary examination of the scene indicates that he may have been speeding.

The incident caused the closure of the road and traffic had to be diverted.

In the second fatal accident, five-year-old Maria-Christina Demetriou was killed in the afternoon after her family’s vehicle, driven by the father,36, collided at around 2.15 pm with another car and overturned on the Famagusta to Larnaca motorway.

The girl was reportedly thrown through the window of the pickup truck following the collision. Her father reportedly stopped a car asking them to transfer him and his daughter to the Larnaca general hospital. She was pronounced dead upon arrival at the hospital. In the car were also the 35-year-old mother and the family’s two other children, two boys aged four and nine.

The accident occurred near Avdelero, police said, when it appears that a car driven by a 34-year-old man, hit the back of the family’s twin cab pickup causing the father to lose control of the vehicle causing it to overturn. None of the children – who were in the back seat – were wearing seat belts, reports said.

The mother was diagnosed with multiple fractures to her hands and head injuries, while the four-year-old son was also seriously injured. They were taken to the Larnaca general hospital. Their condition is serious but not critical. The father and the family’s nine-year-old son were slightly injured.

Until late on Monday, the mother had not been informed of her daughter’s death, out of fear her condition might deteriorate.

The 34-year-old driver of the other car, who was too slightly injured, was arrested to be questioned over the circumstances of the accident.

The road was closed for around four hours with police were diverting drivers to the old highway through the exit at Oroklini.

Police spokesman, Andreas Angelides, said that a meeting is taking place on Tuesday morning on the orders of the police chief to discuss the current situation as regards road accidents.

“Despite constant police efforts to avert the loss of lives in accidents,” Angelides told Sigmalive, everyone must realise that they must assume their responsibility towards themselves and others as regards their road behaviour.

Last week, the Road Safety PIN Report, published by the European Transport Safety Council, said that Cyprus had the highest increase in road deaths for 2017 out of 23 EU member states.