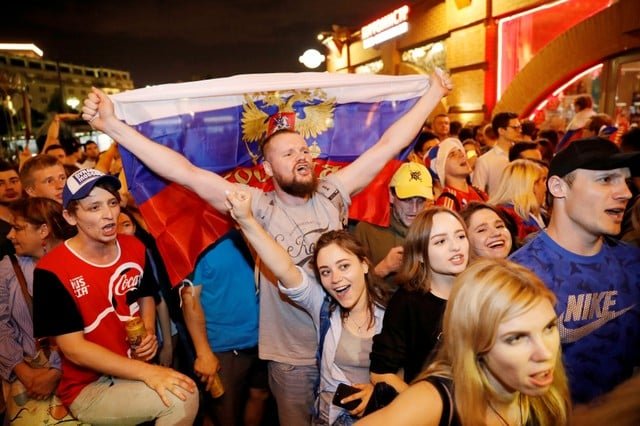 Russia has dramatically confounded its critics, 0 earning itself a place in the knockout stage in an unexpected turn of events that has delighted the Russian public.

Uruguay coach Oscar Tabarez knows his side have yet to hit top gear at the World Cup but warned anyone who is thinking of writing them off to remember their run to the Copa America title in 2011.

Uruguay, face Russia in Samara later today, have already booked their last-16 place after 1-0 victories over Egypt and Saudi Arabia, yet their performances have been edgy in comparison to the hosts who sparkled against the same opponents.

Tabarez, however, was not overly worried about their early form.

The 71-year-old is a wily character, having been in charge of Uruguay since 2006, and he delved into his memory banks on Sunday to remind everyone about how they sealed their last Copa America title seven years ago.

At that tournament in Argentina, they drew their opening two group matches, before sneaking into the knockouts where they eliminated the hosts before going on to lift the trophy with an emphatic 3-0 victory over Paraguay.

“We are aware that there is pressure there and we also believe that in our prior performances, we haven’t fully lived up to our potential,” he told reporters on the eve of their final Group A fixture.

“But we face that with calmness. We have had these situations before. In the Copa America in 2011, it was a similar situation, there were matches where we were far from brilliant.

Despite the difficulties they had in their opening matches, Uruguay have won their first two games of a World Cup tournament for the first time since 1954 and stand one win away from topping the group.

While Tabarez did not want to be drawn on his game plan to face the Russians, he did confirm that he would not be using the opportunity of their early qualification to rotate his players in their final game.

Russia, having crushed Saudi Arabia 5-0 and made light work of Egypt in a 3-1 win, meaning only victory will see Uruguay finish above the hosts and avoid the winners of Group B in the process.

Russia coach Stanislav Cherchesov was in bullish mood ahead of their final showdown with Uruguay, dismissing suggestions his men under pressure because of their status as World Cup hosts.

After Russia, the lowest ranked team at the tournament, surpassed expectations by winning both of their games so far, pressure has been mounting on Cherchesov’s men to keep up the winning run.

Cherchesov, however, expects his players will be up to the task.

“They keep asking me about pressure but this is a medical term,” Cherchesov told reporters. “We are professional players who are preparing for our game.

“This is the World Cup and the team must be in the optimum condition. We are a team and we must do our job.”

Despite securing Russia’s first last-16 appearance since 1986, when they qualified as the Soviet Union, Cherchesov does not want his players to drop their guard against Uruguay.

“We are preparing for this game exactly the same way,” he said.

“Qualification doesn’t mean a thing. Those players who are better prepared will play. Our medical team will also advise us. No special changes are expected.”

During a tense news conference, Cherchesov bristled when asked about the number of routine drugs tests his team have faced and also the distances Russian players have run at this tournament.

The topic came up after Russian doctor Eduard Bezuglov said the hosts had given over 300 testing samples to FIFA and other governing bodies – a number he said was twice as many as the England team.

According to FIFA’s statistics Russia have covered more ground than any other team, with their opening 5-0 victory over Saudi Arabia seeing them run a collective 118 kilometers.

Although Cherchesov refused to answer the question on doping tests, he did respond to the query on distance covered.

“If nobody has noticed anything other than runs and sprints then we will have to do something else,” Cherchesvo said with a smile.

Saudi Arabia and Egypt will try to avoid finishing last in Group A as they bow out of the World Cup on Monday, a disappointing end to the tournament in particular for Egypt and their usually prolific striker Mohamed Salah.

Both teams lost their first two games and the only thing they can salvage in the Volgograd Arena is the chance not to finish bottom of their group.

For Saudi Arabia, the match also offers the possibility of a first goal in the tournament in Russia.

Egypt, making their first World Cup appearance since 1990, had been tipped to advance into the knockout rounds after looking strong in the qualifiers.

But they narrowly lost to 1-0 to Uruguay in their opening match, which Salah missed as he recovered from his Champions League final injury with Liverpool. They then went down 3-1 to hosts Russia.

Salah has been pivotal to Egypt, scoring 71 percent of the team’s goals during qualification and claiming their solitary strike of the tournament so far against the Russians.

Despite scoring from the penalty spot, Salah looked like he was still feeling the effects of his injured shoulder in that game.

Egyptian Football Association (EFA) president Hany Abo Rida was quoted by local media as saying that Salah would not be leaving the World Cup early despite his team’s elimination.

While there’s little at stake for the two countries in Monday’s match, Egyptian goalkeeper Essam El-Hadary will be desperate to be on the field in order to enter the World Cup record books as the oldest player to compete at the finals.

The 45-year-old goalkeeper was left out of the previous two games and coach Hector Cuper must decide whether to hand him the gloves for what will surely be his last appearance at the tournament.

Big winners of BET awards were ‘Black Panther’ and Cardi B