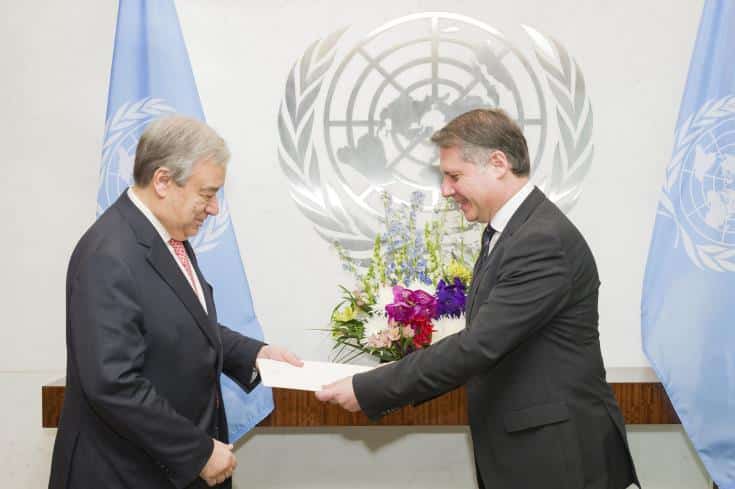 There would be no Cyprus problem, had the rules of international law not been violated, Ambassador Kornelios Korneliou, Cyprus’ Permanent Representative to the UN, has said, pointing out that “if these rules were implemented today, the problem would have been solved to the benefit of all parties involved.”

Addressing a UN Security Council Open Debate on the “Maintenance of International Peace and Security: Comprehensive Review of the Situation in the Middle East and North Africa,” he stressed that there is no other option than to continue with efforts to reach a solution following negotiations under UN auspices.

Furthermore, the Ambassador welcomed the UN Secretary-General’s intention to send a senior official to Cyprus for consultations, aimed at a substantial repetition of the political process.

Korneliou noted that the primary responsibility for preserving world peace and security, along the lines of the UN Charter, lies with Security Council.

Therefore, he said “it must be clear that anachronistic guarantee mechanisms and the presence of foreign troops in a post-solution Cyprus are incompatible with our effort to reconnect our country and to normalize the situation, as the Secretary-General aptly put it.”

The Permanent Representative also said that Cyprus maintains close ties with countries in the region and made particular reference to the trilateral cooperation schemes, Cyprus and Greece are developing together with Israel, Egypt, Jordan, Lebanon and Palestine.

This cooperation, he explained, is based on our commitment to international law and the rules of international order, as the foundations of peace and prosperity for all the countries and peoples in the region.

He also referred to the maritime delimitation agreements Cyprus has signed with Egypt, Israel and Lebanon. “This allowed us to develop a hydrocarbons exploration programme in our exclusive economic zone,” the Ambassador said. He added that the principles of international law show the way forward, while unilateral actions put world peace and security in danger.

Referring to the Middle East, Ambassador Korneliou said that a possible solution to the Israeli-Palestinian question will have an undeniably positive ripple effect on other regional crises and in the battle to combat the threat of violent extremism and terrorism.

“We maintain our principled position and support for a just and comprehensive settlement, based on a two-state solution, in accordance with the international law, the relevant UNSC resolutions and the Arab Peace Initiative” he underlined.

Regarding Syria, the Permanent Representative said that Cyprus fully supports the efforts of the Special Envoy, Staffan De Mistura, aimed at driving the political process forward.

“We remain committed to a unified, sovereign and independent Syria, without any foreign occupying forces. At the same time, it is of utmost importance to address the serious challenges faced by Syrian refugees and the neighboring countries hosting them” he added.

Moreover, the Ambassador condemned all efforts to eliminate ethnic, Christian and other religious minorities in the Middle East. “Cyprus, with a long-standing history of peaceful coexistence of different religious groups, stands ready to contribute in the promotion of inter-faith dialogue” he noted.

Korneliou condemned the deliberate destruction of cultural heritage in Syria and Iraq and across the region. He pointed out that cultural heritage originating from the cradle of our civilization should be protected, thus, he said, Cyprus is at the forefront of efforts to that effect.