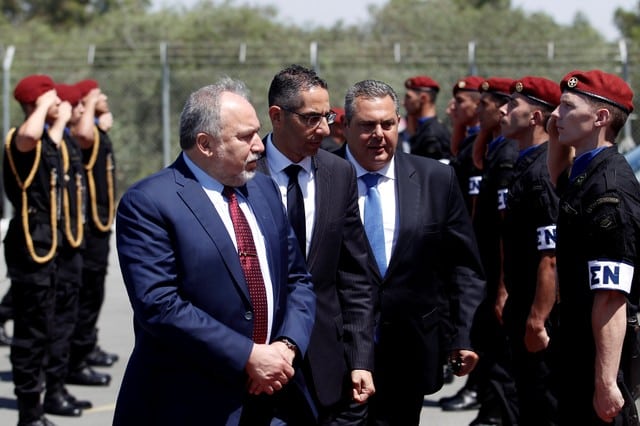 The government on Tuesday confirmed that Israel has proposed to build a port for Gaza in Cyprus, but that Nicosia has yet to respond.

According to Israeli media, Defence Minister Avigdor Liberman advanced a plan to build a port for Gaza in Cyprus when he was on the island to attend the recent trilateral defence summit.

The idea of setting up a facility in Cyprus has been floated for years, and Israel recently made a request to explore the issue, according to Cypriot government spokesman Prodromos Prodromou.

“It is an old issue which is now being re-discussed,” Prodromou told Reuters.

“There will be contacts between the government and all interested parties in the region and, possibly, a decision will be taken. At the moment no decision has been taken. The request is being examined, it hasn’t been rejected,” he said.

The Israeli embassy in Nicosia said on Tuesday it had no comment to make on the report.

The report was published in the Jerusalem Post, citing a TV report.

“Liberman’s Cyprus port plan would include construction of a special pier for cargo ships carrying goods destined for Gaza. They would be checked with the help of an Israeli monitoring mechanism to ensure that no weapons were being smuggled into the Hamas-controlled area,” the Jerusalem Post said.

After that, it added, they would likely be sent to Gaza directly by ferry, given that the enclave lacks a port large enough for the docking of cargo ships.

Citing Channel 2, the newspaper said the principles of the plan were agreed between Liberman and Cypriot Defence Minister Savvas Angelides during the summit on Friday. Within two weeks, work would begin on a detailed plan that would be presented within three months.

“But any such move would be conditioned on Hamas’ agreement to return the remains of two Israeli soldiers and to release the three Israeli civilians believed to be held captive in Gaza,” the Post said.

Liberman’s office neither confirmed nor denied the report, it added.

“It did say that Liberman and the defence establishment were working with the international community on plans to change Gaza’s reality”.

“We cannot release any details beyond that,” his office said.

Goods shipped by sea usually come to an Israeli port and are transferred to Gaza over land. Israel enforces a maritime blockade on Gaza, which it says is meant to prevent weapons from reaching the territory ruled by the Islamist militant group Hamas.

Israel controls two land crossings into Gaza and Egypt controls a third. But it is reported that the Egyptian crossing at Rafah is often closed and is not designed for the passage of goods and that most commercial and humanitarian goods bound for Gaza enter through Israel’s Kerem Shalom crossing.
The Cypriot defence ministry has not commented as yet.

In 2012 Gisha, an Israeli human-rights group forced the Israeli government through the courts to release an official document detailing the number of calories Palestinians would need to avoid malnutrition under its blockade of the Gaza Strip.

The study, Food Consumption in the Gaza Strip – The Red Lines, said that “in order to maintain the basic fabric of life” in the area, Israel would allow in 106 trucks with food and other essential goods every day.
Gisha said that, by comparison, some 400 trucks were delivering goods to Gaza before Israel tightened its blockade of the strip in 2007 after the Hamas Islamist movement seized power there.

To circumvent the blockade, Palestinians brought in tonnes of goods through smuggling tunnels dug under Gaza’s border with Egypt.