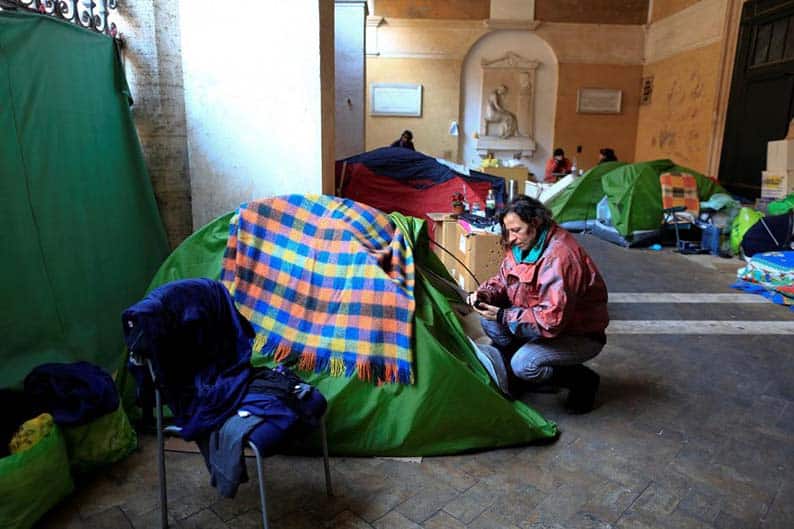 In the underdeveloped south of Italy, the bedrock of 5-Star's support, 11.4 per cent of people were living in absolute poverty last year, up from 9.8 per cent in 2016

The number of people living in poverty in Italy climbed to its highest level for more than a decade in 2017, data showed on Tuesday, prompting a promise of urgent action from the country’s new government.

Those living in “absolute poverty” rose to 5.1 million last year, or 8.4 per cent of the population, despite a fourth consecutive year of modest economic growth. That was up from 7.9 per cent in 2016 and the highest since current records began in 2005, national statistics bureau ISTAT reported.

ISTAT defines absolute poverty as the condition of those who cannot buy goods and services “essential to avoid grave forms of social exclusion”.

Italy emerged from a steep double-dip recession in 2014, but the report shows that the slow growth posted since then has done little to help its poorest.

Gross domestic product rose 1.5 per cent last year, the strongest since 2010. Roughly the same rate is forecast for this year, which would leave Italy in its customary position among the euro zone’s most sluggish economies.

Fighting poverty has always been a battle cry of the anti-establishment 5-Star Movement, which emerged as easily the largest party at national elections in March when it took some 32 per cent of the vote.

The 5-Star formed a coalition government this month with the right-wing League, and its leader, Luigi Di Maio, said the latest data showed the urgency of 5-Star’s flagship policy of a universal income, or “citizen’s wage” for the poor.

“It’s not possible to carry on like this … the citizens’ wage must be launched immediately,” said Di Maio, who is deputy prime minister as well as industry and labour minister in the new government.

Opinion polls show 5-Star’s support has ebbed slightly in recent months while the League, which took 17 per cent at the March 4 election, has surged on the back of a vigorous and popular campaign against immigration.

Both parties are now estimated at just under 30 per cent, with the latest poll published on Tuesday by the SWG agency putting the League on 29.7 per cent and 5-Star on 29.4 per cent.

In the underdeveloped south of Italy, the bedrock of 5-Star’s support, 11.4 per cent of people were living in absolute poverty last year, up from 9.8 per cent in 2016, ISTAT said.

ISTAT said Italians living in “relative poverty,” or those whose disposable income is less than around half the national average, also edged up in 2017 to 9.4 million people, or 15.6 per cent of the population.

Animal Party steps in to save trapped snake