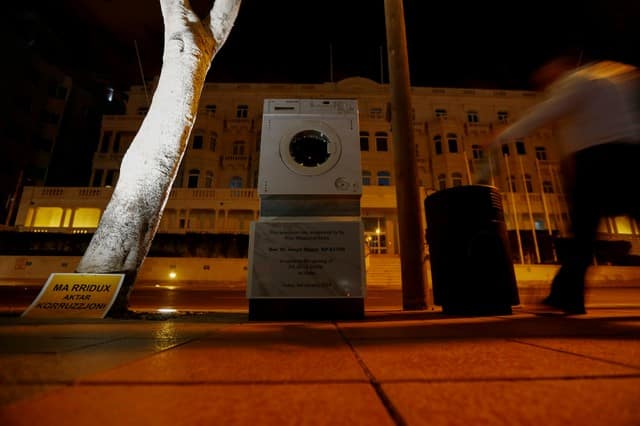 A washing machine and a mock plaque commemorating the opening of Pilatus Bank by Maltese Prime Minister Joseph Muscat in 2014, which was left outside Whitehall Mansions, which houses the Maltese-registered Pilatus Bank

The collapse of Latvia’s ABLV and the freezing of operations at Malta’s Pilatus Bank exposed shortfalls in recent reviews of anti-money laundering rules, which the 28-member EU is now trying to address.

Both banks were at the centre of money laundering allegations by U.S. authorities, which the head of euro zone banking supervision, Daniele Nouy, said revealed a “very embarrassing” weakness in European oversight.

“There is agreement on the importance of enhancing the current monitoring of the implementation of anti-money laundering measures,” Mario Centeno, head of the Eurogroup of eurozone finance ministers, said in a letter to the President of the European Council, Donald Tusk, before a summit on Friday.

He said a report on strengthening oversight will be prepared in July, paving the way for “further measures by end 2018”.

Newly-adopted anti-money laundering rules, set to enter into force by 2020, foresee the establishment in all EU countries of centralised bank account registers to gather financial data.

But cooperation among national forces to counter financial crime is still weak and has prevented enforcement measures, even in cases where there has been serious suspicion of wrongdoing.

Pilatus had long been a concern for eurozone supervisors, but Maltese authorities froze the bank’s assets only after its Iranian chairman was arrested in the United States in March on charges of money laundering and bank fraud.

Latvia’s ABLV has denied any wrongdoing, while Pilatus has not replied to several requests for comment from Reuters.

The two cases raised wider concerns over national oversight in smaller EU states. The European Banking Authority (EBA) this month began a formal inquiry into how Maltese supervisors dealt with Pilatus after they failed to act for several months on its Azeri connections.

Latvia is investigating whether its banks acted as conduits for Russian funds used to interfere in elections and politics elsewhere, Reuters exclusively reported last month.

“We need to draw practical lessons from the events in Malta and Latvia,” EU justice commissioner Vera Jourova told EU lawmakers this week, calling the Pilatus and ABLV cases “scandals” that required actions.

She flagged the possibility of setting up an EU “centralised body” to address money-laundering risks, which are now supervised by a range of national authorities.

Some states have already expressed a will to establish a new body to counter money laundering, while others favour giving more power to one of the existing EU regulators, like the EBA.

Germany and France, the euro zone’s largest members, last week called for an EU deal by the end of the year to measure the money-laundering risks within the banking sector.

However, the growing political demand for a crackdown faces a tight legislative calendar, giving new proposals nearly no chance of EU parliament approval before elections due next year.

Changes could however be made to existing proposals, such as an overhaul of banking capital rules on which final talks are due to begin next month. But that would require a significant deviation from the scope of the proposed rules.

Threat of collapse looms over German coalition over migrant issue