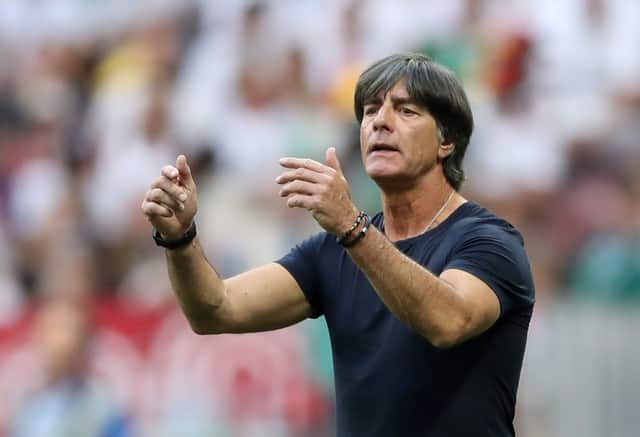 Joachim Low's Germany need to beat South Korea by two goals or more to guarantee they qualify, or they must better Sweden's result in the other group game against Mexico

Germany look set to rely on players who did not win the 2014 World Cup to carry them past South Korea in their final Group F match on Wednesday and into the knockout stage.

A shock 1-0 opening loss to Mexico was followed by a last-gasp 2-1 victory over Sweden, with players like Marco Reus, Sebastian Rudy and Julian Brandt providing much of their spark in the latter.

The world champions now need to beat South Korea by two goals or more to guarantee they qualify, or they must better Sweden’s result in the other group game against Mexico to secure a top two finish.

The South Koreans, after two defeats, would have to beat Germany by more than two goals while hoping Sweden lose to Mexico to have any chance of advancing.

“We have a lot of alternatives, that is the structure of our squad,” said Germany coach Joachim Low.

Low had already benched World Cup winners Mesut Ozil and Sami Khedira after their first game and will add even more players who were absent in 2014 to his next line-up against South Korea on Wednesday.

The Germans have so far failed to live up to their expectations as title favourites and were it not for those players hungry for World Cup success, they might already have been booking their return flights to Frankfurt.

Reus, who missed the 2014 tournament after being injured in their final warmup game, should start once more after his fine performance against Sweden.

He has quickly ousted Ozil, who had faced a barrage of criticism for his opening match performance.

Instead Reus, time and again, sliced past the Swedish defence with his speed and was a constant threat while also scoring the equaliser in their win.

Central defender Niklas Suele, who four years ago had just won promotion from the third division, is also likely to start in the place of the suspended Jerome Boateng, another World Cup winner who was sent off against Sweden.

Holding midfielder Rudy, who started against the Swedes, broke his nose in that game, but should he be fit to play he would probably be picked ahead of Khedira, who admitted his own performance in their opener against Mexico was bad.

Thomas Muller, a winner in 2014 with 10 World Cup goals overall to his name, has yet to score in Russia.

He is also feeling the pressure from 22-year-old Brandt, who has only had two brief substitute appearances so far but made an impression and hit the post against Sweden while also looking far more dangerous than Muller.

Low sounds like he is keeping his options open.
“It is about using all possibilities. Those players who did not play will definitely still be needed,” he said.
That may not sound like a vote of confidence in his 2014 champions, but it’s not 2014 any more.