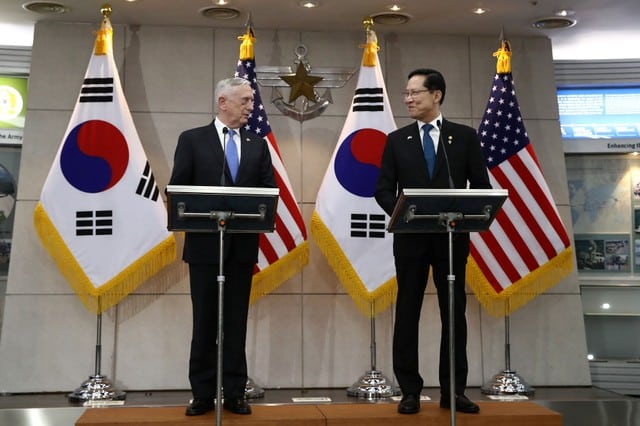 US Defence Secretary Jim Mattis on Thursday assured South Korea of an “ironclad” commitment to its security, including keeping US troop levels unaltered, even as diplomats seek an agreement with North Korea on denuclearisation.

Mattis, during a brief visit to Seoul, defended US President Donald Trump’s decision this month to halt “war games” with South Korea, saying it would increase the opportunity for diplomats to negotiate.

But Mattis added that US and South Korean forces would remain “united, vigilant and ready.”

Critics of Trump’s decision on the joint military exercises say it is a major concession to North Korea that, if prolonged during what are expected to be lengthy negotiations, risk eroding the readiness of US and South Korean forces.

North Korea has long sought a suspension of the drills.

The decision is part of efforts to defuse tensions and build trust, Mattis and his South Korean counterpart Song Young-moo said in a joint statement after their talks.

Trump has also drawn criticism from national security analysts for an agreement that emerged from his June 12 summit with North Korean leader Kim Jong Un that had few details on how Pyongyang would surrender its nuclear weapons and ballistic missiles.

“U.S. commitment to the Republic of Korea remains ironclad and the US will continue to use the full range of diplomatic and military capabilities to uphold this commitment,” Mattis said before meeting Song.

“And this includes maintaining the current US force levels on the Korean peninsula,” he said.

The United States has about 28,500 troops in South Korea.

Still, Mattis has yet to explain how the United States will maintain readiness of US-South Korean forces, who have long prided themselves on the ability of being able to “fight tonight” if needed.

“The recent decision to suspend the Freedom Guardian exercise creates increased opportunity for our diplomats to negotiate, increasing prospects for a peaceful solution on the Korean peninsula,” Mattis said, standing alongside his South Korean counterpart.

“At the same time, the US and (South Korean) forces remain united, vigilant and ready to defend against any challenge.”

Mattis and Song said there had been “substantial progress” on preparations for the transfer of wartime operational control to South Korea from the United States, the joint statement said, without elaborating.

South Korea‘s President Moon Jae-in has vowed to complete the handover during his term in office which ends in May 2022.

The defence chiefs also reaffirmed that United Nations sanctions against the North should remain in place until Pyongyang takes “concrete, irreversible” steps toward denuclearisation, the joint statement said.

North Korean state media has said Trump had agreed during his summit with Kim to lift sanctions against the North in addition to providing security guarantees, under the principle of “step-by-step and simultaneous action.”