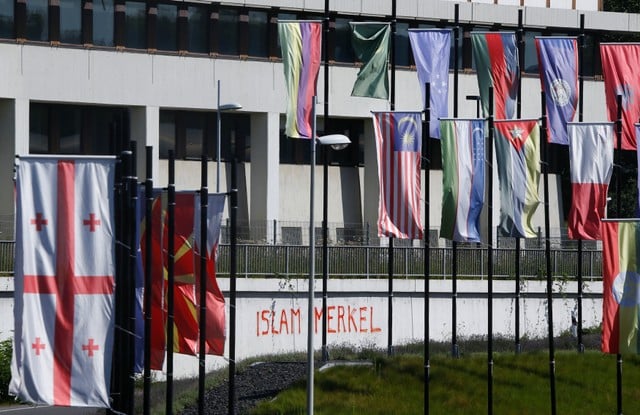 Arriving in Brussels, the leaders of Spain, Greece, Finland and Luxembourg all expressed support for Merkel‘s push to curtail “secondary migration” of refugees who arrive at the EU’s southern border before heading north to Germany.

Europe’s longest serving leader has come under acute political pressure from her hardline allies in Bavaria, who are threatening to close their border to migrants if she can’t work out a deal with Germany’s European partners.

That could trigger the collapse of Merkel‘s three-month-old government and cause the EU’s control-free Schengen travel zone to unravel.

Luxembourg’s Prime Minister Xavier Bettel added: “There are so many people who arrived in different countries and then made their way to Germany. I understand when Germany says ‘Why do we have to deal with everything?'”

Greece’s Alexis Tsipras and Finland’s Juha Sipila also promised to work with Germany on the issue.

Earlier, speaking in the German parliament, Merkel called on European leaders to forge a common approach to migration, calling it a “make or break” issue for Europe, where right-wing, anti-immigrant parties are gaining strength.

“Europe faces many challenges, but that of migration could become the make-or-break one for the EU,” said Merkel, whose 2015 decision to open Germany’s borders to hundreds of thousands of refugees divided Europe and continues to haunt her at home. “Now as then, I think that was the right thing to do,” she told the Bundestag.

According to draft conclusions circulated before the two-day summit, the leaders will agree measures to strengthen Europe’s external borders, spend more on fighting illegal immigration and step up cooperation to prevent refugees and migrants from moving within the bloc.

But leaders remain deeply divided over how to handle asylum seekers, with eastern European countries such as Poland and Hungary refusing to accept quotas of refugees while Italy and Greece struggle to cope with arrivals by sea.

A deal among all 28 EU states is unrealistic, so Merkel is pushing for a “coalition of the willing” on migration. She hopes that will appease the Christian Social Union (CSU), which has hardened its line before of an autumn election in its home region of Bavaria, the main German entry point for migrants.

Convincing Italy to do a deal may be the biggest challenge. Its new government, which includes the anti-establishment 5-Star movement and far-right League, has rejected any moves that would make it handle more migrants.

At stake is EU members’ unity and trust in each other, as well as the Schengen zone. A breakdown of Schengen would hit business and personal travel across the bloc, threatening jobs among the EU’s half a billion people.

Differences between EU leaders have played out prominently in recent days before what is certain to be a fraught discussion behind closed doors.

In public, they will attempt a show of unity to persuade their electorates they are in control and there won’t be a repeat of 2015. Opinion polls show migration is a top concern for EU citizens.

One idea is for “regional disembarkation platforms” around the Mediterranean, where the EU would hold people who attempt the dangerous sea crossing, assess their asylum requests and hold those who fail before they are sent back.

There are many legal, security and rights-related problems with the plan and no country outside the EU has been willing to host such sites. The EU hopes UN agencies for refugees (UNHCR) and migration (IOM) would run such centres.

“People rescued in international waters should be quickly brought ashore in safe locations in the EU, and potentially elsewhere too,” the two agencies said in a joint statement before the summit.

The EU hopes backing for such an idea would be enough for Merkel, Italian Prime Minister Giuseppe Conte and others to stave off challenges from those advocating a tougher course.

“More and more people are starting to believe that only strong-handed authority, anti-European and anti-liberal in spirit, with a tendency towards overt authoritarianism, is capable of stopping the wave of illegal migration,” he said.

“If people believe them, that only they can offer an effective solution to the migration crisis, they will also believe anything else they say,” he added. “Time is short.”