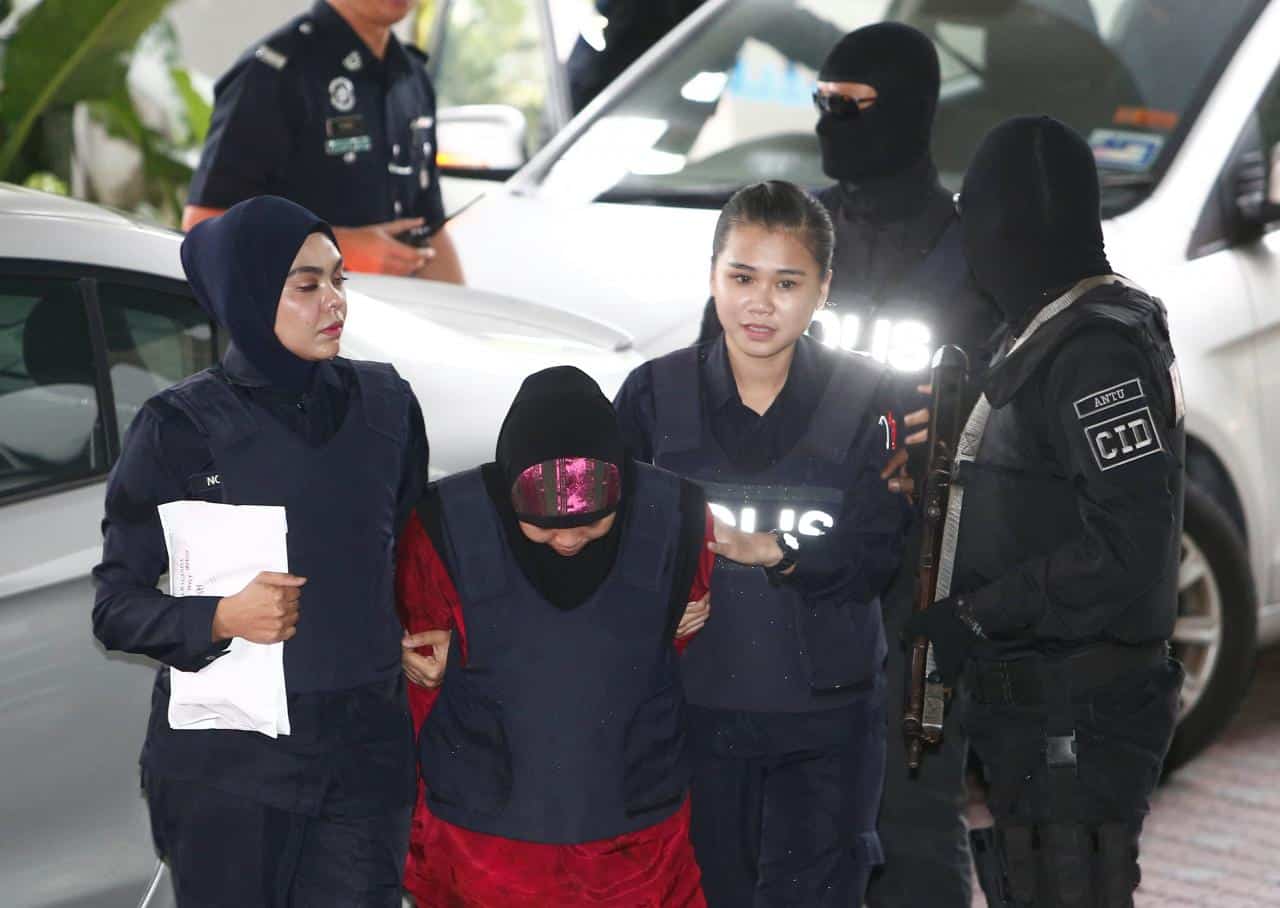 Indonesian Siti Aisyah, who is on trial for the killing of Kim Jong Nam, the estranged half-brother of North Korea's leader, is escorted as she arrives at the Shah Alam High Court on the outskirts of Kuala Lumpur

Two women accused of murdering the estranged half-brother of North Korea‘s leader must have been trained to carry out “an assassination” using deadly VX nerve agent, Malaysian prosecutors said, wrapping up their case on Thursday.

Kim’s face was smeared with VX, a banned nerve agent developed as a chemical weapon.

“You have to be trained for it… there can be no room for error,” prosecutor Wan Shaharuddin Wan Ladin said, likening the “assassination” to something seen “in a James Bond movie”.

The women, both in their 20s, are the only suspects in custody and face the death penalty if convicted. They pleaded not guilty, saying they believed they were acting in a prank reality show and did not know they were handling anything lethal.

Wan Shaharuddin said assassins would have to know the best route for VX to enter the victim’s body, and know that they have to wash the VX off themselves within 15 minutes to avoid being contaminated.

Airport security footage screened in court showed both women heading to a washroom shortly after the assault on Kim.

“If it was a prank, why did you smear not only on his face or on his eyelids, but also in the eye itself?” Wan Shaharuddin said, adding that there was “an element of aggressiveness” involved.

The prosecution made their closing arguments based on 34 witness testimonies. Trial judge Azmi Ariffin set Aug 16 to rule on whether to acquit the women or call for them to enter their defence. Defence lawyers say the killing was politically motivated, with many key suspects linked to the North Korean embassy in Kuala Lumpur, suggesting the women were mere pawns. Pyongyang has denied accusations by South Korean and US officials that North Korean leader Kim Jong Un’s regime was behind the killing.

Kim had criticized his family’s dynastic rule of North Korea and his half-brother had issued a standing order for his execution, some South Korean lawmakers have said.

Lawyers for both women said prosecutors had erred in charging the women with four men seen fleeing Malaysia on the day of the killing, given the presence of several other North Korean suspects named during the trial.

“How can there be a common intention between the accused and the four, when many others have escaped? There are other suspects who are still at large,” Gooi Soon Seng, Siti Aisyah’s lawyer, said.

He described the prosecution’s evidence against his client as “flimsy and circumstantial” as it relied only on the security footage and traces of VX by-products found on the grey sleeveless shirt she was seen wearing. There was no clear footage showing Siti Aisyah smearing Kim’s face. The recordings show only a blurry image of someone the prosecution identified as Siti Aisyah hurrying away from the scene.

Siti Aisyah’s DNA was not found on the shirt recovered by police, while the VX by-products detected were commonly found in other substances apart from the poison, Gooi said. Huong’s lawyer Naran Singh said while his client was seen walking quickly to the bathroom after the killing, she did not seem to know that her hands were covered in poison. “If someone knew the substance on their hands could kill and that they need to wash it quickly, they would run for their life, not walk.”

Hundreds of Syrian refugees in Lebanon begin returning to Syria

Group win at expense of Germany has Swedes dreaming of ’94