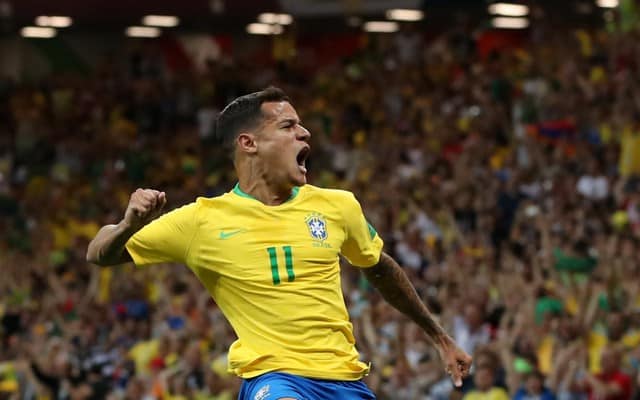 Philippe Coutinho has been Brazil's best player so far

After an entertaining World Cup group stage crammed with late deciding goals and a host of unexpected results, not least holders Germany crashing out, Reuters Sports picks a combined starting 11 of the best performing players so far:

The goalkeeper made a jaw-dropping save in all three of his games, the pick of which was to deny Leon Goretzka’s point-blank header in Korea’s famous 2-0 win over Germany, for which he was deservedly named man of the match.

The full back was given greater room to roam by manager Gareth Southgate and his pace and crossing ability caused Panama and Tunisia constant headaches in England’s first two wins.

The centre back marshalled the only defence to keep clean sheets in all three games and with him patrolling the backline, Uruguay rarely looked in danger.

The defender banged in two penalties in three games but it was his grit and sacrifice which harnessed Sweden’s unforgiving backline and saw them claim top spot in Group F.

Another soldier of Uruguay’s gruelling defence, Caceres has also provided vital support in wide midfield, one of the few weak spots in Oscar Tabarez’s side.

The holding midfielder’s renowned energy levels have again come to the fore in Russia, prompting Paul Pogba to rave after the 1-0 win over Peru that his team mate had “15 lungs”.

Had barely featured for his country until he was called on to replace an injured team mate against Saudi Arabia but he quickly showed his class with two mesmerizing goals and struck again against Egypt to help send the host nation through.

The playmaker has taken full control of Brazil’s attacking machine and been responsible each time they have broken the deadlock, striking first against Switzerland and Costa Rica and assisting Paulinho’s goal against Serbia.

Confirmed his reputation for delivering on the biggest stage yet again with a hat-trick in the thrilling 3-3 draw with Spain, crowned by his outstanding late equaliser from a free kick.

Four goals, two in each game he has played and all from open play, speak for themselves.

Seamlessly lead the nation out of the post-Zlatan Ibrahimovic era by building a resilient team who bounced back from their painful loss to Germany to thrash Mexico and top a group many thought they would struggle to get out of.

Murray in Wimbledon draw, faces Paire in first round