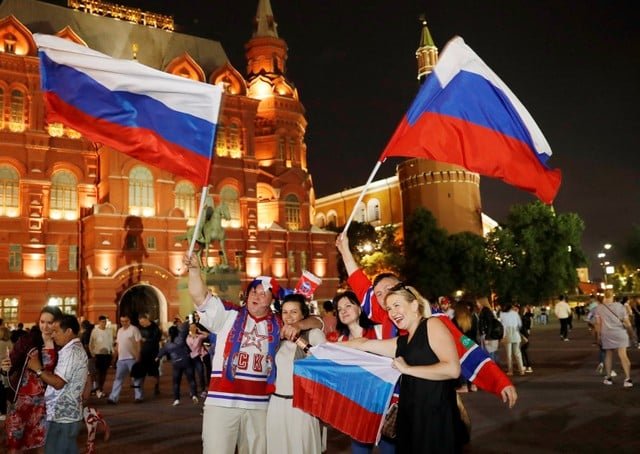 The Russian team, dismissed as a national embarrassment before the tournament, have reached the knockout stage and managed to win over the country's supporters with convincing wins over Saudi Arabia and Egypt

Entertainment, upsets, personalities, controversy and goals – the World Cup has had it all – and the knockout stage drama hasn’t even begun.

The group stage of the tournament can risk being a simple process of eliminating the weaker nations and serving as a mere warm-up for the favourites.

But with holders Germany already back on home soil after their shock exit and Lionel Messi and Argentina just minutes away from joining them, the opening phase has been anything but a formality.

The 48 games have produced 122 goals, an average of 2.5 goals per match, just below the level for the 2014 tournament as a whole, with just one goalless draw – the tepid final Group C match between France and Denmark.

Amongst those goals there have been some moments of breathtaking brilliance. Lionel Messi’s sublime goal against Nigeria, with the ‘thigh of God’ control, Brazilian Philippe Coutinho’s strike against Switzerland and Luka Modric’s devastating drill into the bottom corner in Croatia’s 3-0 upset of Argentina.

From Portugal there was Ricardo Quaresma’s cheeky outside of his foot ‘trivela’ against Iran and Cristiano Ronaldo’s free-kick against Spain in the thrilling 3-3 draw which set the tone for the group stage.

There is no better drama in football than late drama – 26 goals were scored after the 80th minute, of which 13, 50 per cent, have been winners or equalisers.

Marcos Rojo, the Argentina defender, volleyed home like a world-class striker in the 86th minute against Nigeria – a goal which kept his team in the tournament and sent the Africans out.

Germany’s Toni Kroos kept his side on life-support for a few days after his dramatic late free-kick winner against Sweden.

What has helped maintain the combativeness and tension in the group stages has been the strong displays from some of the lower seeds.

South Korea are out but will take some comfort in having beaten the defending champions Germany. Iceland, in their first World Cup, almost made it and will remember how they held Messi and Co to a 1-1 draw.

Nigeria were minutes away from advancing at the expense of Argentina and Senegal were in with a chance until the death. Iran and Morocco showed signs of real progress.

All the action has taken place in stadiums and host cities which, in contrast to some of the pre-tournament expectations, have been welcoming and enjoyable filled with fans from all over the world.

The fears of racial abuse from Russian fans have not materialised nor has there been any hint of hooliganism or violence.

The Russian team, dismissed as a national embarrassment before the tournament, have reached the knockout stage and managed to win over the country’s supporters with convincing wins over Saudi Arabia and Egypt.

While politics has been largely kept in its place, FIFA did not over-react when it did appear in the form of two Swiss-Albanian players, Granit Xhaka and Xherdan Shaqiri celebrating their goals against Serbia with provocative nationalist gestures.

Most of the controversy in the opening two weeks has been related, entirely predictably, to the video assistant referee (VAR) system or more specifically to referees who, despite the chance to see replays in a major tournament for the first time, have still managed to make some mistakes.

But while VAR is no miracle cure for refereeing errors, it has not produced the chaos that some predicted for it’s debut use – even if it has unfortunately incentivised protesting referees decisions.

And while diving remains a problem in the sport, as does playacting, so far there has been a refreshingly low amount of such shenanigans.

Positive football has been to the fore but it remains to be seen if, in the tension and high-stakes of the knockout stage, that remains the case or if negativity and cynicism creep in.

The departure of Germany and Argentina’s failure to win their group, have led to an unbalanced draw with the top half packed with favourites – five-time winners Brazil, Messi’s Argentina, Ronaldo’s Portugal, France and Belgium.

That opens up the possibility of a surprise finalist from the bottom half of the draw – England, Croatia and Spain will all fancy their chances. However, never will Switzerland, Sweden, Colombia have seen a more realistic route to the big game while the hosts will allow themselves to dream of a best finish since the Soviet era.

If the opening fortnight has been a fun festival of football – for those who have survived – now comes the ruthlessly unforgiving reality of the knockout.

Teams and coaches who have been heralded and praised will find themselves packing their bags in the next few days, heading home to watch the rest of the tournament on television while they try to deal with the emotions their exit will generate.

Their achievements so far will count for little – as enjoyable as it has been, all we have witnessed so far has been a lengthy appetiser.

But what a main course to look forward to.