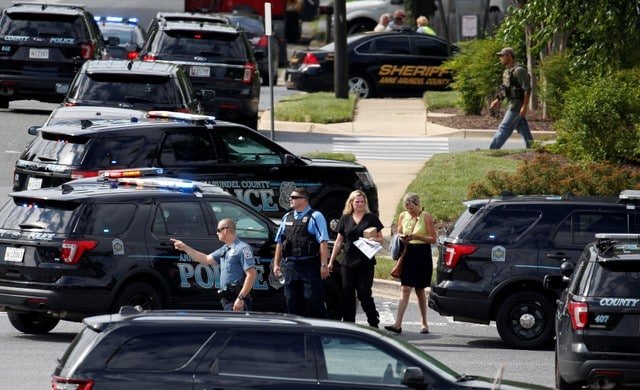 Law enforcement officials secure a crime scene after a gunman fired through a glass door at the Capital Gazette newspaper and sprayed the newsroom with gunfire, killing at least five people and injuring several others in Annapolis, Maryland

A Maryland man was charged with multiple counts of murder on Friday, a day after police say he rampaged through a newsroom in Annapolis with a shotgun and killed five people in one of the deadliest attacks on journalists in US history.

Authorities have not released the identity of the suspect, but online court records showed a man by the same name was charged with five counts of murder on Friday. Ramos had a long-standing grudge against the newspaper, and unsuccessfully sued for defamation in 2012, court records showed.

Ramos is accused of entering the Capital Gazette office on Thursday afternoon and opening fire through a glass door, hunting for victims and spraying the newsroom with gunfire as reporters hid under their desks and begged for help on social media, police and witnesses said.

Rob Hiaasen, 59, Wendi Winters, 65, Rebecca Smith, 34, Gerald Fischman, 61, and John McNamara were shot and killed. All were journalists except for Smith who was a sales assistant, said William Krampf, acting chief of the Anne Arundel County Police Department.

The Capital newspaper, part of the Gazette group, published an edition on Friday with photographs of each of the victims and a headline “5 shot dead at The Capital” on its front page.

The newspaper’s editors left the editorial page blank with a note saying that they were speechless.

Ramos brought a defamation lawsuit in 2012 against Eric Hartley, a former staff writer and columnist with Capital Gazette, and Thomas Marquardt, then its editor and publisher, a court filing showed. Neither Hartley nor Marquardt are still employed by the paper.

An article by Hartley had contended that Ramos had harassed a woman on Facebook and that he had pleaded guilty to criminal harassment, according to a legal document.

The court agreed the article was accurate and based on public records, the document showed. In 2015 Maryland‘s second-highest court upheld the ruling, rejecting Ramos’s suit.

Ramos tweeted at the time that he had set up a Twitter account to defend himself, and wrote in his biographical notes that he was suing people in Anne Arundel County and “making corpses of corrupt careers and corporate entities.”

According to a WBAL-TV reporter who said she spoke with the woman, Ramos had harassed and became “fixated” with her for no apparent reason, causing her to move three times, change her name, and sleep with a gun.

Phil Davis, a Capital Gazette crime reporter, recounted how he was hiding under his desk along with other newspaper employees when the shooter stopped firing, the Capital Gazette reported on its website.

The newsroom looked “like a war zone,” he told the Baltimore Sun. “I don’t know why he stopped.”

“As much as I’m going to try to articulate how traumatizing it is to be hiding under your desk, you don’t know until you’re there and you feel helpless,” Davis said.

After the shooting, police in Baltimore and New York City deployed extra officers to the offices of major media outlets as a precaution.

Capital Gazette runs several newspapers out of its Annapolis office. They include one of the oldest newspapers in the United States, The Gazette, which traces its origins back to 1727.

The newspapers published by the company, part of the Tronc Inc media group, have focused on local news in the shadows of two much larger competitors, the Washington Post and Baltimore Sun.